I remember looking at this picture frequently growing up in California as Mother would talk about the two of them.  This picture was taken in the early days of their home-ownership.  They moved into their new house on New Year’s Day – 1937.  Over the next twenty-five years by the time I first visited, the two of them transformed this into a much-adored home. 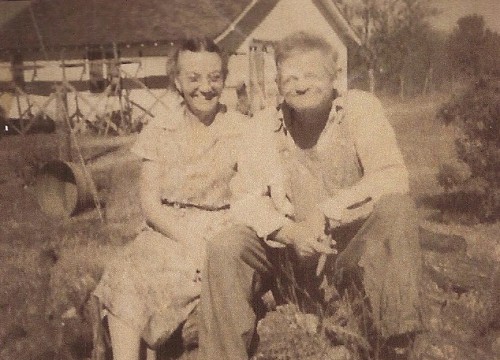 When we moved to the Midwest in the mid-60s, this home became like my grandma’s home.  You see, Aunt Lizzie was my mother’s oldest sister who was 29 years her senior.  So my Aunt Lizzie was more like “Grandma Lizzie.”  This was not like other houses we had left behind in modern southern California.  It was located six miles into the country off the highway on a dirt road and up a rocky driveway.

There was a well just a few feet from the back door that yielded fresh, cold water.  I learned the meaning of “drawing water” as we lowered the bucket down into the well and pulled it back up by the attached rope.

There was an outhouse instead of a bathroom and a rooster who liked to attack you as you walked to the “facility.”  You had to run fast to protect your legs from his painful pecks.  I don’t know why he couldn’t just stay in the chicken coup and keep the hens happy.  Which brings up another thing – eggs were collected from a real-life hen house rather than buying them at the grocery store.

Then there was the cow that Uncle Hike patiently tried to teach me to milk.  I think her name was Bessie.  I either didn’t have the strength or didn’t have the technique.  But he always managed to get a bucket full every morning and every night.  He delivered it to Aunt Lizzie who knew how to get the most out of each bucket.  We had fresh whole cream for coffee, and she taught me to churn butter.  Sometimes we had buttermilk; and in the summer, we made homemade ice cream.

After we milked the cow, sometimes we shucked corn so that mean old rooster and the hens would have something to eat, and sometimes I just sat and watched Uncle Hike whittle.  That wasn’t something I saw in southern California either.  I guess it was his version of “Words with Friends” (therapy).

Each year, Uncle Hike hid his watermelon patch to keep the ornery teenagers from vandalizing it.  He would say, “You know, I wouldn’t care if they just took a watermelon and ate it.”  But they made a game of it to find the patch and destroy every melon – not funny 🙁 .  Sometimes he took me on walks of the property and neighboring property to search for arrowheads.  Occasionally we found one, but I think he had already confiscated most of them judging from the number he had mounted in frames all over the walls of the home.

When we returned, I helped Aunt Lizzie fix lunch; and then she showed me how to make a peach or apple pie from scratch.  But my favorite thing to do with her was get up early before anyone else was awake and help her fix breakfast for everyone who had spent the night before – biscuits, gravy, eggs, pancakes, sausage, bacon – the works.  She did most of the fixing, and I usually set the table – and what a beautiful table she could spread.  Uncle Hike had his special spot at the table with plenty of room to “hike” one leg up on the chair, rest his elbow on it and perch his coffee in the same hand.  (Have you figured out where he got his nickname?)

A brisk breeze blew in from the bedroom windows and made up for the lack of air conditioning.  After dark you could hear June bugs slam against the screens, crickets chirp, and various other critters that I could never identify.  And, of course, in the morning, we awakened to the crow of that aggressive rooster and the elegant singing of the birds.  Uncle Hike taught me to listen to one in particular whistling “wet year, wet year” announcing it would rain that day.

Please don’t mistake the lack of a few modern conveniences to assume the home was uncomfortable.  Aunt Lizzie decorated beautifully and kept the home spotless.  I loved her white curtains.  Flowers and shrubs were abundant in the yard close to the home.  She was the epitome of Proverbs 31.

Many of these reflections were created with others.  You see, I spent most of my time there on the weekends traveling up from Arkansas with my mother and sisters; and my cousin, Lee, (more like “Uncle Lee”) brought his family down from Kansas City.  We all converged there for the weekends until we all ultimately moved to the area – about the time there was much excitement with plans for indoor plumbing, running water, and a bathroom for the home.

I have shared my memories, but each one in my extended family could write their memories because Aunt Lizzie was mother, grandma, great-grandma, aunt, and great-aunt to many.  It was the place to go for Easter, 4th of July, Memorial Day, and just any and every ordinary day – no need for notice to drop in.

There was so much life in that home, and as goes the circle of life, so there is death.  This home that brought so much life to our family was the passing place for some as well – “Auntie” (our matriarch, Aunt Myrt – Grandpa’s sister), Uncle Hike’s sister, my grandma (Rhoda Margaret “Meg”), and finally Uncle Hike.  They were brought “home” to transition to their heavenly home.

After Uncle Hike passed away and Aunt Lizzie moved into town, Cousin Lee and his friendly wife, Charlene, moved into the homestead.  She made everyone feel loved and special.  They carried on many of the same family traditions with their family.  Charlene continued to make this house a home after Aunt Lizzie and Lee both passed on.  It became “Granny’s house” to her grandchildren and great-grandchildren.  Every Sunday her entire family converged just like we did 40+ years ago and three generations earlier.

Then suddenly, without warning, one year ago today, Granny slipped away from us … such unexpected loss and sorrow.  The family still assembles seeking that at-home comfort and security.  They converge on Sundays clinging to that home – the memories, the love, the unity.

And I wonder who will make memories for the next generation.  As the lights are turned off, will we hear:  “Good night Grandpa, good night Grandma, good night Sister”?  And you thought that originated with The Waltons?  Nope – that was my cousin Rita!

The home awaits the next generation.