She wasn’t very tall.  She was round, full, robust.  She was a “darkie.”  You see, of my mother’s fifteen siblings, about half of them were like Mama, fair skinned with light hair and blue eyes (Grandma) and the other half had dark hair, some with brown eyes (Grandpa).  Aunt Elnora had a gentle, quiet spirit but had a sense of humor which she revealed to her inner family circle.  She was my surrogate grandmother during my early childhood in California, although she was my aunt – my mother’s second oldest sister of eight girls.  She had one daughter about my mother’s age (Geneva) and one grandson (Mike).  She found the love of her life in her 50s.  I remember being a little embarrassed when they kissed on our porch as I ran into the house with my cousins and friends.  Today, I smile when I think of that and am glad that I witnessed their tender love – Newt and Elnora.

It irritated me that my best friend’s mother kept saying her name wrong.  Eleanor was that former president’s wife’s name.  Many times I corrected her … Elnora, Elnora, Elnora!

Her yard overflowed with flowers.  When sisters and I spent the night, she fixed pancakes for breakfast.  She made them tiny so that we could boast about how many we had eaten – maybe a dozen.  Sister Vickie ate more.  There were white and black rabbits in cages in her back yard.  She let us pet them.  Their fur was so, so soft.  Our poodle, Flip, liked playing with her dog, Alvin.

We moved far away – back to the family’s hometown in Missouri – around more aunts, uncles, cousins, and Grandpa.  Three years later she came to visit – the summer of 1968.  She cooked for us once again even though Mama said she had not been feeling well.  I remember having a discussion with my younger sister about age as we waited at the table.  Kathy wanted to know if 30 was old.  I said, “Yes.”  But before I could explain further, Aunt Elnora forged through the doorway between the kitchen and dining room with a big bowl of mashed potatoes, set them on the table, and corrected me.  “Why, no!  Thirty’s not old.  I wish I was thirty.”  Yes, I did think Aunt Elnora was old.  After all, she had been like my grandmother all those years in California since Grandma died when I was just three years old.

After she cooked, she also did the dishes and then went in the living room and sat in the rocking chair.  Mama said the leaky heart valve drained her energy – a leaky valve which might have been caused from a childhood bout of rheumatic fever.  The Lawrence Welk show came on and someone sang In the Garden.  Aunt Elnora said, “That is my favorite hymn.  I want someone to sing that at my funeral.”

I remember thinking:  that’s a nice song, but you’re not that old yet.  She stayed a few more days then returned home on a bus to her life with her caring husband.  They had moved to a duplex community where he worked as the caretaker.

A few weeks later, still in the heat of the summer – August 1 – I asked Mama if I could sleep on the couch because it was so hot upstairs.

The lights had just been turned out when the telephone rang. The only telephone in the house was on an end table next to the couch on which she was sleeping. Immediately, she knew there was bad news on the other end of that call. Mother and Father’s bedroom was just off the living room. Mother called out to her to answer the phone, but she could not bring herself to pick up the receiver. She knew her aunt Elnora had died.  (“Reflections” – Chapter 1)

Mother listened as Aunt Clara said, “Hold on to your hats.  I’ve got bad news.”

I don’t know why, but I already knew.  As the story goes, Newt and Elnora had just finished dinner and shared a laugh about eating a whole chicken – it was just a “little” chicken – then he left to lock up the laundry facilities.  A neighbor saw Elnora come out of their house and look toward the laundry room as she fell on the sidewalk.  She was already gone when Newt reached her, although she was transported by ambulance to the hospital in hopes of a miracle.  But this was not the day for a miracle.

The family in Missouri started making plans to travel for the funeral and burial which would be in California.  Aunt Eunice and Uncle Rube offered to take both of their vehicles, so I was privileged to go.  After Kathy, Karin, and I climbed into the back of the station wagon, Grandpa reached for the door to shut it and said, “I should grab my bag and get in there with you.”  But he couldn’t make the trip.  He was 88 and had now outlived four of his sixteen children.  We arrived at Geneva’s house in the middle of the night.  I visited cousins and a close friend from school.  Then in a couple of days, it was time for the funeral.

I was twelve years old.  It was not my first funeral.  I knew the drill – reading of the obituary, a song or two, a short message, and then the viewing.  As the minister read the obituary, I recalled what she had said that evening in the rocker …  In the Garden.  Why didn’t I tell someone?  Well, she must have mentioned that to someone else as well; because when he was finished, a recording of a song began … I come to the garden alone … and I breathed a sigh of relief.  After the sermon, I stood alongside Mama in the family line.  But when we were to move closer, I could not.  Mama grabbed my waist to help me, but I said, “I can’t.”  I stayed back as Mama stepped closer for one last goodbye.  Aunt Elnora’s hair had been permed since returning to California, and I wasn’t sure they had the right person.  Could there have been a mistake?  I guess not, because we proceeded to the cemetery and laid her to rest.

Two score and four years have passed since that hot summer of 1968, and I don’t know why Aunt Elnora is at the forefront of my mind and in my heart.  Maybe it’s because at my next birthday, I will be the age of her death.  I have missed her – we have missed her – and I realize she really was not that old.  But like her, I have come to understand my mortality.  I find myself thinking her same thoughts.  So I have asked my sisters if I precede them in death, to please play this song at my funeral.  It’s been on my heart this week too.  (Be sure and listen.)

And one last thing:  “Aunt Elnora, when my time comes, make sure you tag along with Grandpa and Grandma and escort me up that pearly white staircase.  It will be so good to see you!” 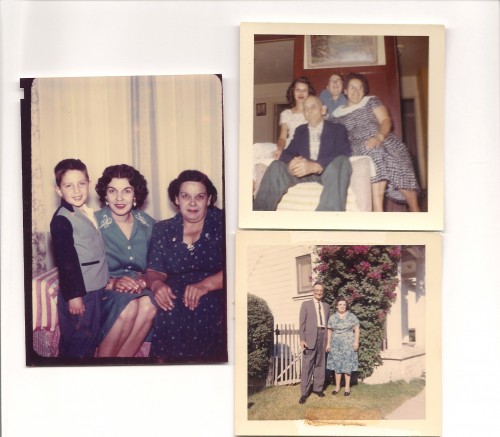