As I stretched the seat belt across my blue floral-printed dress to begin the forty-minute commute to work, my mind wandered back fifteen years ago when the dress was new.  I thought it was a perfect summer work dress.  I dry cleaned the dress for years until last year when I chanced machine washing it in cold water.  Considering the age of the dress, it didn’t seem practical to continue with the dry cleaning expense.  It survived and so did I.   My life was, oh, so different in the early days of this dress.

To say the least, I was a bit intimidated at our first meeting.  There sat one of the most respected men in the corporation, a thirty-year veteran, member of senior management, PhD in Economics, and a heart transplant survivor.  He was mature, distinguished, and had grandchildren the age of my children.  We worked alongside each other for the last six years of our career at this Fortune 200 company – the liaisons of a 22-member board.  I was there to assist him.  I have many fond memories.  I never heard him raise his voice.  He eventually agreed that there was no need to keep a manual calendar when the electronic version was introduced.  We documented the history of our outstanding farmer-owned coop, we managed the governance process; and I loved my work.  He had a very controlled sense of humor.  It was his idea to participate in a fundraising float parade.  (All of us ended up enjoying it, although we felt we were too busy for this. 🙂 ) 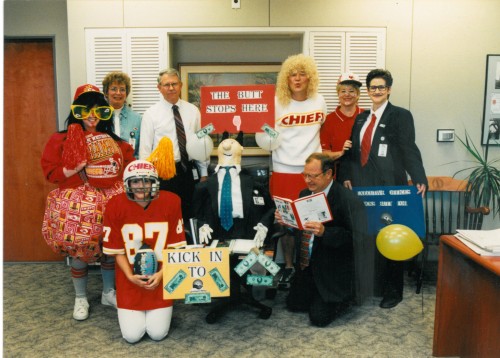 Unfortunately, a few years later, we also witnessed the downfall of the organization.  As he made plans to retire, I sought out another company.  He spoke words of encouragement to me … “a new beginning, a fresh start.”  And so it came to pass.

I didn’t know if I could work alongside of him the way I had Bernie.  He was so much younger – ten years my junior.  After all, I was accustom to mature bosses, professionals.  And I was accustom to large corporations.  But, nonetheless, there I was beginning again.  And I learned from this younger one.  Soon I learned he, too, was mature, professional, and didn’t require accolades of glory to perform, much like Bernie.  I watched him build a company alongside the founder.  I witnessed him make mature decisions and manage people fairly.  He was respectful to everyone but made tough decisions when necessary.  We shared a love of baseball.  On stressful days, he might pick up one of the bats leaning against his office wall and swing it around.  On good days, he whistled.   I worked alongside him and the founder for a decade and watched as they positioned the company for a grand merger.  And I watched them step down for the new leadership and a new beginning.

This past week, as I wore my blue dress, these two beginnings came full circle at the same time.  I heard that after 22 years with his new heart, Bernie transitioned to his eternal home – what an amazing gift to have that many years following his transplant and to enjoy a decade of retirement.  Then Brooks stopped by the office to pick up a few last things.  As he swung those bats on his shoulder, flipped the switch, and headed down the hall whistling, I was left reflecting.  I was reminded of the last Mary Tyler Moore episode when she peeked back into the studio one last time and turned off the lights.  And so I remembered the two “B” bosses, the blue dress, and beginnings.

And for most of us, life continues on …