I remember what I wore – soft corduroy plum slacks, a multicolored sweater vest, a plum tweed with a bold royal blue wide patch of threads running through it.  The silky royal blue blouse tied it all together.  My mother was excited to watch our four-month old son while we enjoyed a rare evening out.  First stop was the restaurant at the Adams Mark across the street, great seafood that night.  It was a crisp October evening, and I couldn’t have been more pumped.  It was exactly where I wanted to be and the only thing I wanted to do right then.  I had planned for it carefully.  With a little luck, my dream was unfolding.  The year was 1985.

The stadium rocked every night during the regular season.  It was difficult to buy tickets except for upper deck, in advance; and many games were sold out.  I dreamed of someday affording season tickets, but we were starting careers and had a mortgage.  Money was allotted for our home, and that was the right thing to do.  So several times a year, I purchased upper deck tickets; and a couple of times a year, I was lucky enough to use company season tickets or be treated by a friend who had the same.  I loved baseball and loved the Royals.  I remember the Royals’ first appearance in the World Series – 1980.  My boss was given a corporate suite to fill and use.  I watched as my senior co-worker walked out the door early that one day.  She was selected to go.  She cared nothing about baseball, and I wondered if she even knew which team the Royals were playing that evening.  Oh well, I watched from home and accepted that seniority and age come with privileges.  After all, I was a young, confident 20-something whippersnapper and would have many more opportunities.  She was 60-something.

Five years later when the post season rolled around, I decided I would see if I could buy tickets and not depend on someone to treat me.  Things were done differently in those days.  I remember sending a check (or possibly money order) in the mail with a request for the American League Championship Series.  You were permitted to request only one – either World Series or League Championship Series.  There were no guarantees, and selection was random.  Since our track record was not good to actually get to the World Series, I opted for the League Championship Series and waited.  I can assure you that I crossed all the Ts and dotted all the Is.  I was elated when I received an envelope in the mail with two tickets instead of a refund, upper deck down the line between 1st and right field – game 3 – Friday, October 11, 1985.  Little did I know the historic game I would be privileged to see.

I remember Hal McRae saying at a pep rally before the team left for Toronto for the first two games to never give up.  If the team loses a game or two, don’t give up on us.  We’ll be back.  (paraphrased)

That was prophetic.  The Royals dropped the first two games in Toronto but came home to a hungry hometown.  And George Brett delivered the game of his life.  It was a thrilling win to witness.  George went 4 for 4 with two home runs, and the Royals won 6-5.  The “Royals” chant echoed through the spiral ramp on the way out.  Everyone knew that finally it was our turn to win it all.  And we did.  I watched the remainder of the post-season games on television.  We did not expect it to be the last World Series win, and we certainly didn’t expect 1985 to be our last post-season appearance for three decades. 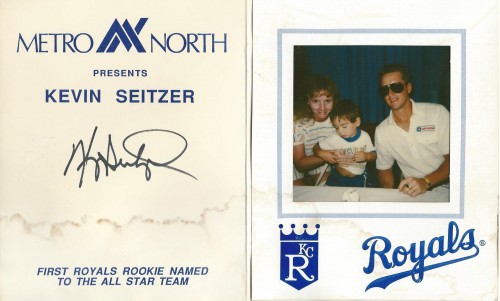 Waited in line with the oldest for 2.5 hours, 8 months pregnant, to get an autograph that he wanted.
He shyed out. (1988)

Life goes on.  I had two more sons.  And, yes, they all played baseball.  The focus was on their game while the Royals struggled, and struggled, and struggled.  We attended a few games a year, what we could manage around their own baseball schedules; but they didn’t know the excitement of those winning years.  Company tickets were easier to come by.

Fast forward to September 18, 2014.  I’m sitting at my computer in a virtual window waiting for my chance to buy post-season tickets.  (My middle son explained how it works now.)  I didn’t know if I would actually buy if the opportunity opened up.  I knew they would be expensive and the choices limited.  The telephone rings.  It’s my youngest son frustrated that the site isn’t working properly and wonders if I can drive out to the stadium to purchase tickets for him since he’s three hours away.  (I decline.)  He laughs when he finds out I’m going through the same thing, “You ARE my mother.”  My oldest son living far away in another state is still a loyal Royal and wonders if anyone’s getting tickets.

In about a half hour I learned that the youngest finally succeeded in purchasing two tickets as did the middle son, both upper deck.  I hope they get to use them and get to feel the excitement that I felt 29 years ago.  The “Let’s Go Royals” chant has meaning this year for the first time in their lifetime.  It’s been a fun season, and it ain’t over till it’s over. (Yogi) 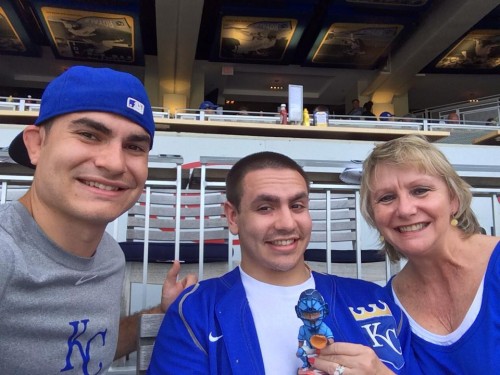 I haven’t told them yet and they haven’t asked, but Mom splurged.  She has three tickets and pretty darn good seats in the lower level, just in case.  After all, seniority and age come with privileges. 🙂