Someone asked me over the weekend if I had recovered from baseball. My answer: “I’ll be okay in a couple of days.” It helped to watch the Party Like It’s 1985 video a few times. That always brings a smile to my face.  Our city is Royal proud as American League Champions. Now it’s day 7 after the disappointing loss; and since everyone else has managed to move on, including the Royals as a team, I suppose it’s time for me too … after these final thoughts.

So Blue October ended up being a little bluesy. I thought for sure we had the team of destiny, like the Miracle on Ice in 1980. We were headed for a fairy-tale ending. But at the last minute, the crown jewel slipped away. I’m not normally superstitious but started a ritual with our winning streak by rubbing Salvy’s head each morning. The mornings I rubbed his head, we won. If I forgot, we didn’t. This ritual was successful up until  game 7. In reality, you win some and you lose some. 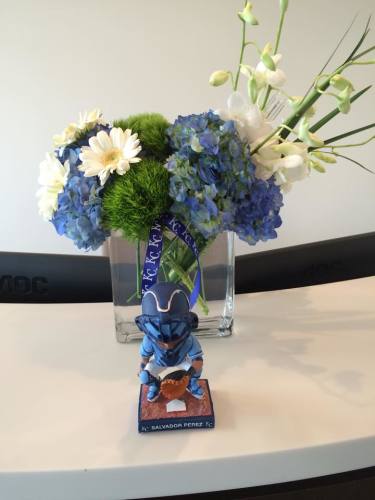 There was also the disappointment of not being able to purchase tickets at face value for the World Series. I contemplated scalper pricing – even up to two hours prior to game time for game 7. But  I sensed the spirit of Dave Ramsey sitting on my right shoulder whispering, “What are you thinking? This isn’t in your budget, and you can see it so much better in the comfort of your own home. Save your money for that emergency. Be practical!”

What I really wanted was to be in the middle of the excitement, like Vincent. By trade, he is a professional photographer whose goal is to shoot in every sports venue in the USA. But I happen to think he’s a fantastic storyteller. He was at game 6, and you can read his incredible adventure traveling from Pittsburgh to Kansas City here.  He encouraged me to go ahead and splurge on that ticket to game 7, but I couldn’t pull the trigger. You might understand my bit of regret after reading his story. At least I have my memories of the Division Championship game.

Undoubtedly there will be a few changes when next year rolls around. All of Kansas City will hope and now anticipate another Royal run.  But 2014 will be a special year to remember – what a ride! Boys, please don’t wait another 30 years because I’ll be dead!

Maybe it’s time for seniority and age to invest in a reasonable portion of season tickets … hmm … that I will will ponder.

But for now, a few leaves remain on the trees. There’s just enough time to tend to those apples that have been patiently waiting. The cross stitch project sits in a bag in the corner. It’s the grateful season followed by the joyful season of giving and ringing in a new year. We will remember our loves and celebrate the resurrection with some birthdays scattered between.

“There is life after baseball, and it will be okay!”

And until the next crack of the bat … life continues on.