I once had a dream, a plan that would change the course of my life and solve a problem.  The plan was coming together quickly and efficiently, so much so that it occurred to me one day I should probably seek God’s counsel.  So I said, “God, if this is not your will for my life, please close the door because this is moving fast, and I am prepared to forge ahead.”

The dream involved drastic changes.  The doors to my dream shut as swiftly as they had opened with no explanation.  My dream was gone, and I could not ignore the truth that God had probably answered my prayer.  I just wish he had explained the “why” to me.

During this period of time, I had shared this plan with a friend.  My plan caused her to dream – a plan to change the course of her life and move to Alaska.  She asked me if I would help her fulfill her dream and accompany her driving to Alaska from Kansas City because, after all, she needed her car once she arrived.  Always up for an adventure, I said sure, thinking it would be months down the road after she sold her condo.  Then one day she decided to take action and the “when” became now.  She had it all planned – let the realtor continue with advertising and the sale of her condo and she would rent a cottage in Alaska until her condo sold which would clear the way to purchase one in Ketchikan, Alaska.  She packed several boxes of personal belongings and shipped them ahead, rented a storage unit in Alaska, and made all of the plans for our road trip to fulfill her dream.

So we set out on her dream-filling adventure  – a 28-hour drive to northern Washington and a two-day ferry ride on to Alaska.  We started out the first leg of the trip with sunshine on a mild autumn day in the Midwest. 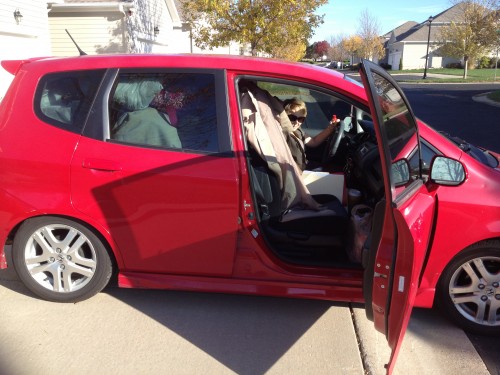 We stopped for gas a couple of times and lunch and found ourselves still driving just after dusk – trying to arrive at our first overnight destination.  We were about an hour away in falling rain when I noticed a deer on the passenger side of the road.  Before I could alert her, there were three more deer before us in the road.  We struck one as they scurried across the interstate.  She miraculously kept control of the vehicle even though we immediately knew there was extensive damage because of an awful rubbing noise coming from the tire/wheel area and the driver’s side headlight was shining off in the field left of the interstate.  She lowered her speed and managed to get to the next exit where we stopped for help.  The local sheriff arrived, completed the necessary paperwork, cut away the headlight, and pulled off the body parts scraping the tire. 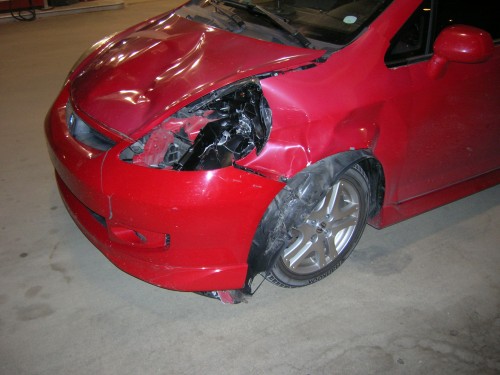 Lo and behold, we were able to continue our journey in the dark rain and arrived at our first overnight destination exhausted and hungry.  Surprisingly, she said the car drove fine.  This was a trip that needed to be executed according to plan in order for it to work.  We had to catch that ferry in two days, and she had to have her car because she was not returning to the mainland.

The next morning we continued down the open roads of South Dakota, Wyoming, and Montana.  The sun was bright and sky was clear, but the wind pulled on the small car making it very difficult to stay on the road.  We later learned there was a severe wind advisory.  As we drove through Sturgis, I was sure glad we weren’t riding a motorcycle! 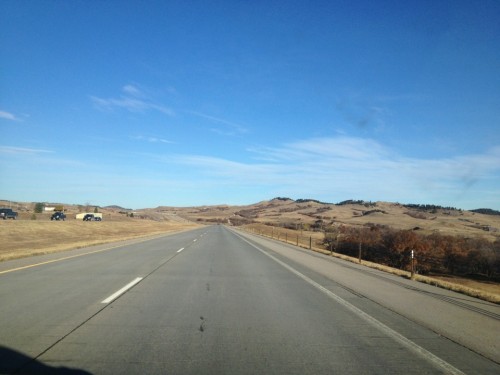 Mid-afternoon we stopped in Billings, Montana, and realized it would be very difficult to make our second night destination, Spokane, Washington.  We pulled out the atlas and decided Missoula, Montana, was a much more realistic goal, changed our hotel reservations, and kept on truckin’.  We still had the benefit of daylight savings time, but somehow darkness seemed to come earlier than planned and we couldn’t make our adjusted destination by nightfall.  By the time we reached Butte and pulled into Wendy’s for the last supper (no Wendy’s in Ketchikan), Cathy had relinquished the wheel; and I was driving a “stick” for the first time in five years.  No one seemed to mind that we drove with our brights on to compensate for the lack of a left headlight.

We enjoyed the spacious room at the Courtyard in Missoula and crashed into our comfy beds.  Our story caught the interest of the waitress the next morning at breakfast who looked at the car in amazement, thought we were quite the adventurous duo, and snapped this picture of us as we left for the last leg of our road trip.  It was another clear day, and the brisk wind continued to howl. 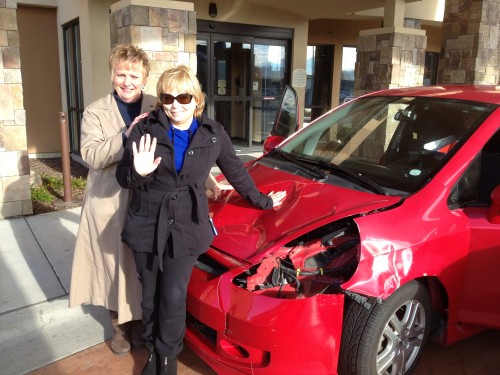 We had received much advice from well-meaning friends and family suggesting we rent a car or change our plans.  After all, we weren’t sure we could open the hood to check the oil, water, etc.  But we came to the conclusion that since the oil had been changed and all fluid levels were checked prior to the trip, we would just forge ahead.  The airbag hadn’t deployed, and we did point out to our concerned loved ones that, indeed, we managed to “fix” the car during a pit stop in a quaint, little Idaho mountain town. 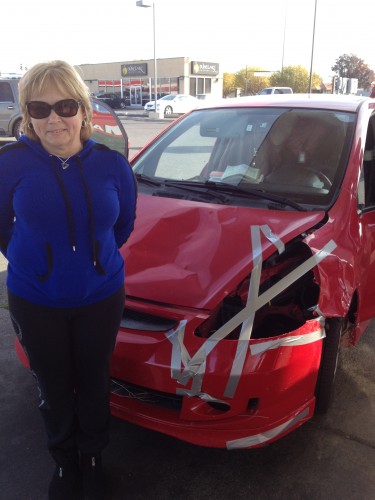 We crossed over into the state of Washington through the mountain range and thought for sure we were back in Kansas as we endured the four-hour drive to Seattle. 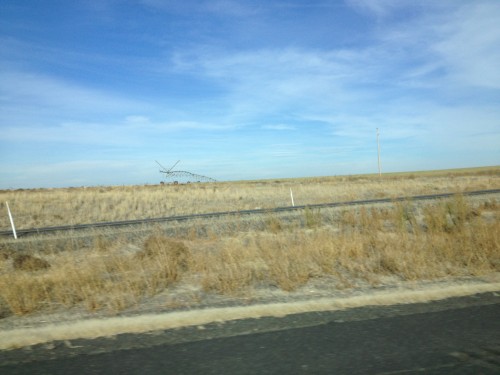 Cathy tired and relinquished the wheel to me again about an hour from Seattle.  Guess I hadn’t done too badly the previous night.  I was wide-eyed and bushy tailed (as they say) and pretended to be Dale Jr. as I drove through another mountain range and into Seattle rush-hour traffic.  Oh my! 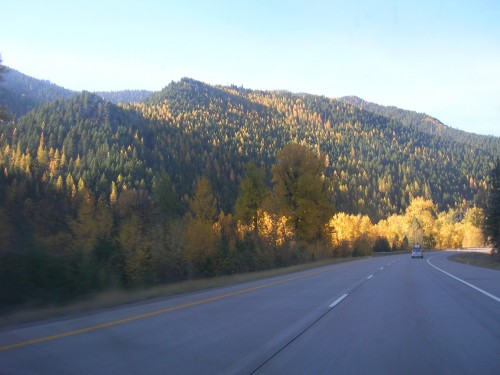 We stopped for about an hour in Seattle to hold Cathy’s great nephews – three-month-old twins and parted with hugs and homemade pumpkin pie.  There was more rain and night driving the last 90 minutes as we headed north to Bellingham where we would board the ferry the next day.  Once in Bellingham, we celebrated with dinner in the hotel restaurant.  A good night’s rest was welcomed as I crashed sideways on the bed after my last bite of pie.  The next morning, I left a copy of Reflections in the lobby library, and Cathy received a visit from the insurance adjuster who wrote her a check for the “deer” damage.  We loaded the suitcases back in the broken carriage that had been our home for three days and drove it onto the ferry at the port of Bellingham.  God kissed the sky with a spectacular sun as we stood on deck and awaited departure.  After navigating nearly 2000 miles, we were thrilled to leave the driving to the captain for a couple days. 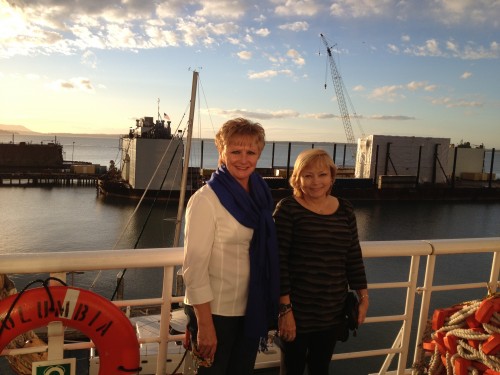 Passengers – that’s such a pleasant word.  We enjoyed the views along the majestic scenic route. 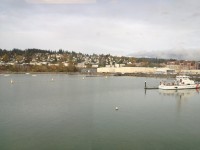 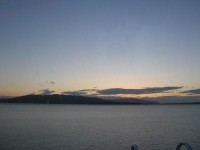 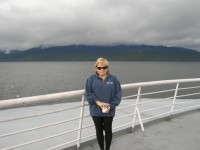 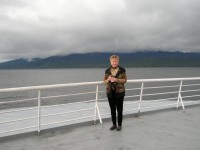 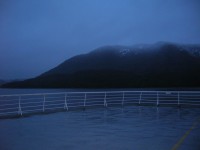 At 7:00 a.m. on the second morning we docked in Ketchikan, and surprisingly were kissed with the sun again for three days as we settled into the Christmas cottage.  The views from the cottage were spectacular. 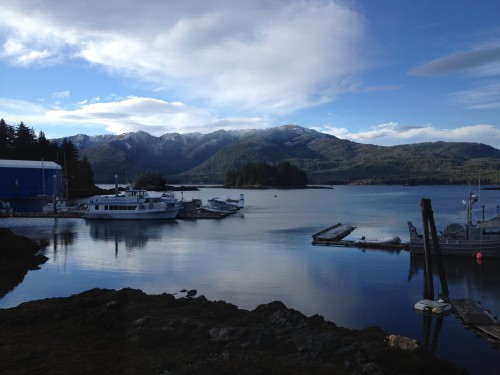 But I was especially partial to the “sunset reflections.” 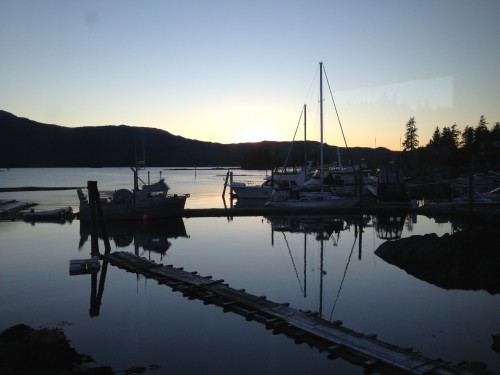 Cathy took care of business, opened a bank account and post office box; and we deposited things in a storage unit that made it in the deer-stricken carriage.  We viewed the condo she hopes to buy.  We perused the shopping district and visited with merchants.  I chose my token souvenir.  It seemed so fitting when the merchant told me they were “dream catcher” earrings. 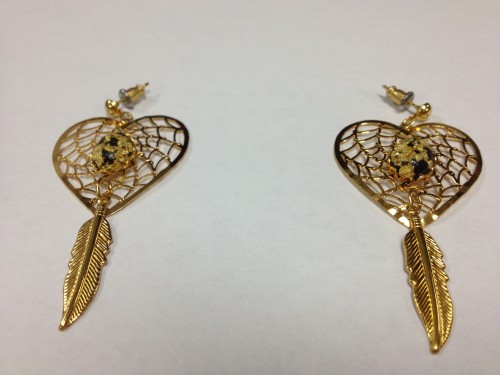 And then it was time for me to go.  I think we were both gripped with sadness.  We met when we were in our twenties and had shared moments and memories for over thirty years – years of employment, children, birthdays, anniversaries, recipes, parties, births, death, and divorces.  And now in our fifties we would share one more hug and goodbye as I boarded a plane for home. 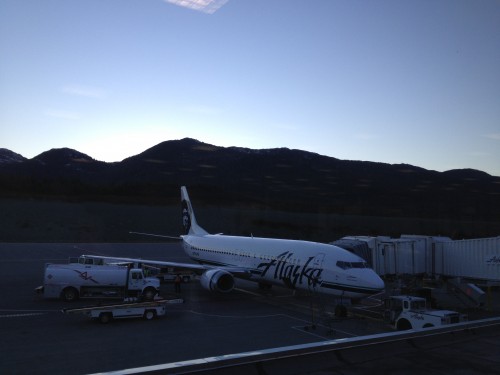 Three flights later I was home, returned to work, and Cathy settled in alone.  And then Mother Nature proclaimed her power as an earthquake struck and Cathy found herself in a tsunami warning forced to evacuate to higher ground.  She must have wondered if her dream was going to collapse.  A few hours later, she was cleared to return to the cottage with the threat of disaster gone.

And life continues on.  She withstood rain, wind, wild-animal disaster and natural disaster – earthquake and threat of tsunami.  But she weathered the storm, endured the journey, reached her destination, and is making her dream of peace and happiness come true.  And I believe God watched over us every step of the way.

The moral of this story is two-fold.  Above all else, don’t give up on your dream.  Press on, grab hold of your dream, and do what you can to make it happen.  But if your dream suffers a fatal blow (like mine), catch a new one.  Just maybe it’s time to dream a new dream.

Yes, by all means, DREAM ON!