As a little girl for as far back as I can remember, I loved looking at our family photos. Some of them were in small paper albums, some were protected in envelopes, and all were stored in a large box. I could spend hours looking at years past seeing relatives I knew as well as many I had never met. We lived in southern California, but half of our family on both sides was in Missouri. One of my very favorite pictures was a black and white glossy wedding photo in a large manila envelope. Oh that dress … it stirred the princess inside of me. I imagined someday I would wear a dress like that. It was the most beautiful dress I had ever seen, and the bride wore it well. She was tiny and beautiful too. Mama told me the groom was my cousin – Daddy’s nephew – and that someday I would get to meet them – Dale and Linda. 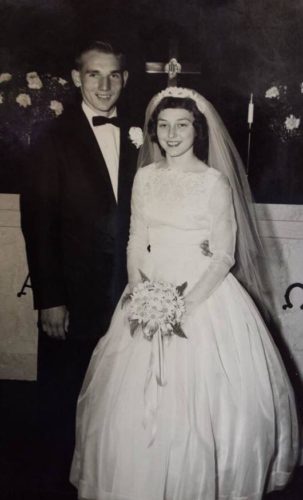 The first time that I remember meeting them was the summer of 1962 when we visited family in Missouri. By that time, they had two little boys. My grandpa (Daddy’s dad) raised Shetland ponies and loved to let his grandchildren and great grandchildren ride these little guys. We loved it – well most of us did. 🙂 I love this picture of my Aunt Fran trying to convince her grandsons this was a fun thing to do. 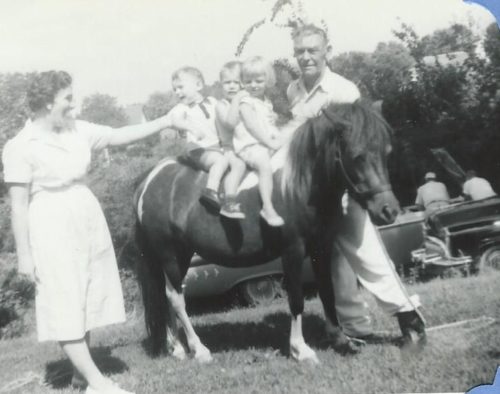 We moved from California to the Midwest in 1965 and visited family more often even though we weren’t all living in the same town. Although we eventually moved closer to my mother’s family, we managed to see my dad’s family a couple of times a year; and Thanksgiving lunch was a tradition with Daddy’s family. Even after rural life with the ponies ended as Grandpa and Grandma aged and moved into the nearby town, we still made the two-hour trip every Thanksgiving morning to Grandma and Grandpa’s.

My grandpa died in 1974, but Grandma still insisted on hosting Thanksgiving even though she was nearly blind. I remember that Linda was such a practical person and was concerned that this was too much work for our aging grandma. Everyone was getting older, growing up, and moving on with their individual lives. When Aunt Maxine traveled from California for a visit in 1981, Grandma wanted us all to gather again. I was busy in Kansas City with work and my life and decided it simply was not going to work for me to make the three-hour drive that day. So early that morning, I called to tell her. I can hear her voice as clearly today as I did then in her Midwestern drawl: “Debbie, are you comin’?”

“No, I’m sorry. I just can’t make it. Please tell everyone hello for me.”

I wish I had made the time.

The following year, on a cold day in January of 1982, Grandma died. We all gathered again – one final time in Grandma’s home. There have been a few reunions over the past thirty years – not enough, but we’re still family.

Earlier this month, we received news that Linda had passed away. Sister and I traveled south a couple of hours for the funeral and wondered what other family members might be there. It just so happened that the day of her funeral would have been my dad’s 93rd birthday, but he had been gone over 25 years. I remembered that Linda and Dale were at the hospital when Daddy died. Sister and I talked as we traveled about how life might have been different had he not died at the age of 67. What if he had lived another 20 years? All of our lives would be, at the least, a little different. It seems like just yesterday we were living in California. 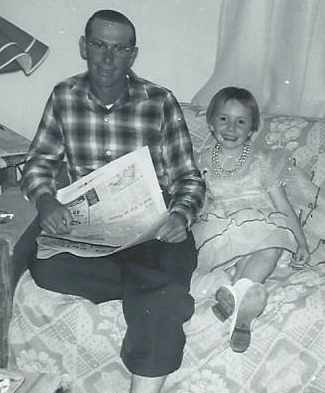 But here we were in 2017 on another cold January day saying goodbye to another family member, and we understand how fleeting life is – a breath one day and a breath the next – then it’s gone. Tick tick tick.

It was good to see family members we had not seen for a while – an uncle, an aunt, and five cousins among many others. 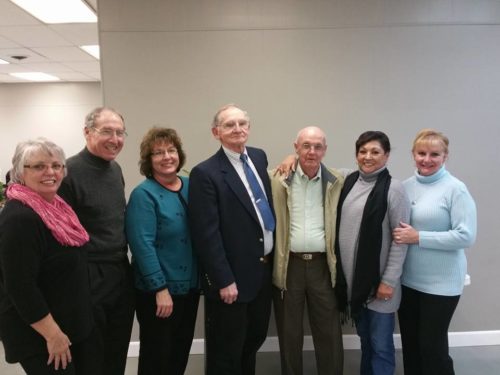 Those closest to Linda lost a wife, mother, and grandmother. I am so sorry for this loss – an earthly loss that is sometimes hard for us to comprehend as a heavenly gain.

And so we are told to “occupy.” But as I “occupy,” I also choose to remember. Tick tick tick.

Someday all of us will understand this completely – Rest in peace.

“Now we see but a poor reflection as in a mirror; then we shall see face to face. Now I know in part; then I shall know fully, even as I am fully known.” (I Corinthians 13:12, NIV)