I am a lover of music.  If you follow my writing, you’ve probably figured out that music inspires me.  However, when I try to make my own music, the result is never what I plan.  I have to rely on the gifts and talents of others to fulfill this need.  So when my favorite performers visit my city, I indulge in the opportunity to see these talented musicians.  Since I don’t miss these opportunities, my sisters tease me … groupie.  Of course, I refuse to wear that label.  I am NOT a groupie.  But here’s my latest little story of simply a night out … with Kenny G.

Last August, I received a flyer from the local symphony for the upcoming pop series season.  One of my favorites headlined the brochure – back in town to perform with the symphony in January – my birthday month.  No more shopping required!  We went on line to purchase tickets (remember last August) – not soon enough for the best seats, however, for either of the two scheduled performances.  We had to settle for choral loft which is behind the stage (musicians’ backs to us).  The only other choice was very top, upper grand tier, on the sides.  Having been to Helzberg Hall several times, I knew there wasn’t a bad seat in the house but was a bit bummed that we were six months away and had to “settle” for these.  I had hoped for the orchestra or parterre section.  I printed off the tickets and tucked them away in a file awaiting my birthday month.

A few months later, I also scheduled a foot surgery for the first of December and really hoped I would still be able to attend the concert on January 17.  I had just ditched the crutches the day before the concert and felt I could leave the foot down long enough for the performance and wear my walking boot.  But I did think it would be a good idea to valet park.  So I went on line to buy the valet parking ticket and noticed an additional performance had been added.  Seriously?  I couldn’t believe it.  I could probably get better seats for the added performance on Sunday, but we already had Friday evening planned.  So I thought, “Oh well, not worth the trouble. We’ll just go as planned.”

We arrived early, and I had a plan to buy Kenny’s latest CD, wait in line to have it autographed, and be included in the drawing for the saxophone giveaway.  (He gives away one at all of his concerts.)  I walked through the front doors of the magnificent Kauffman Center for the Performing Arts just as the ushers were being released to man their posts and immediately saw an old friend, Heidi, a retired school teacher who now works this seasonal, part-time job.  We chatted for a moment catching up, and she asked jokingly if I was one of those crazy fans they had been warned about who might storm the stage.  A groupie?  Not me!  We laughed, and I assured her I would only take my chances at winning the saxophone in the drawing.

I was the first one to buy a CD and the first to wait in line for his autograph.  I waited patiently.  He arrived at the table about 45 minutes before curtain time and autographed the CD.  I said: “Thanks for coming back to Kansas City, Kenny.”  He smiled and said, “Sure thing.”  Without further ado, I yielded my space to the next person (no groupie here 🙂 ).

My foot was tiring, and the boot was a bit heavy, so I asked to squeeze in on a bench by the southern glass wall of the modern architecture.  We sipped coffee.  I decided to “check-in” on Facebook and was in the middle of the post when, to my surprise, there he was about four feet from me!  He had picked up the saxophone from the display table and brought it over to the light.  I shifted gears quickly to snap a picture.  But silly me somehow clicked away from the page before posting and lost the close-up picture.  Not to be completely discouraged, I walked over to the table where he had returned and had to “settle” for a back shot. 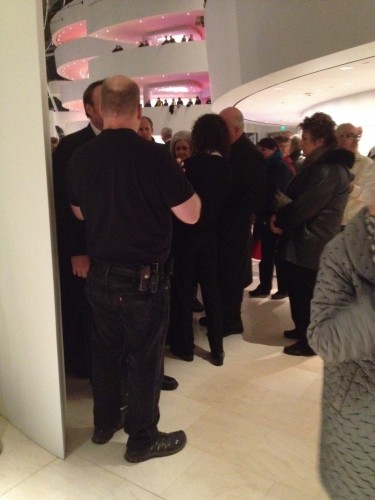 It was time to find our seats in the loft.  We took the elevator to the next floor up, and I had to negotiate a few steps down to the first row of the loft.  I found our seats a few spaces in, right center.  Instead of individual seats, it was a curved bench seat with a back and completely cushioned – very comfortable.  And I was surprised with the tremendous view.  Had I been a “real” groupie with two good feet, I surmised I could jump down right on the stage with them – all of them – Kenny, his band, and the symphony musicians.  Instead, I settled into my assigned spot and observed the sheet music in the percussion section, “My Heart Will Go On.”  I removed the heavy boot and leaned it against the railing wall in front of me as the musicians filed into their seats.  And not being a rookie or a groupie, I didn’t need to see the difference in wardrobe to recognize his four band members over the symphony musicians, although that was an appropriate distinction and quite striking.  (The band members were the “men in black” and the symphony musicians were in white.) 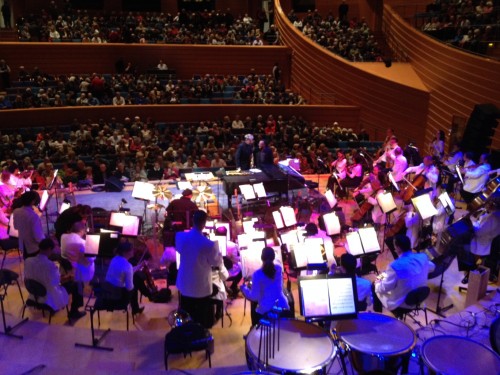 Maestro entered the stage floor with a warm applause; and then from behind me, I heard the familiar sound of a horn, the soprano sax I have come to love.  The vessel for this wonderful sound walked down the same steps I had just taken a few minutes earlier and came to rest on – you guessed it – the front row of the choral loft!!  Of course, being rooted in legalism, I wasn’t about to snap a picture during the performance.  That is prohibited.  But I certainly did enjoy all of the moments – yes, the entire song.  When the song was over, Kenny traveled the entire length of the front row choral seats all the way to the other end.  Oh my goodness, he was headed straight for me and my boot was in the way!!  If he (all 135 pounds) tripped over it, I could reach down and pull his ringlets.  But then my sisters would be correct – I really would be a groupie.  So what do I do?  I cleared the way; grabbed my hefty boot, purse, and scarf; and protected my bum foot as he barreled in front of me “slapping five” with everyone along the way.  (What a moment!)  We smiled as he headed down to the stage, and the evening passed all too quickly.  I thoroughly enjoyed my early birthday present.  Unfortunately, he did not draw my ticket out of the fishbowl.  I was not the lucky one to whom he serenaded and handed over the saxophone.

Heidi found me again as I waited for the valet to bring around our vehicle.  She noticed where we sat, that we witnessed so close the impressive entrance, and wished I had won the sax.  Yes, it would have been nice.  But I enjoyed every note of every song and think I understand why the musicians led the way into battle in the Old Testament stories, why Gabriel will blow his horn on that all-important day, and why there is singing in heaven.  And I am grateful that we have all of these things – gifted people and music – to enjoy a little bit of heaven on earth on just a night out.