Soon after I celebrated my eighth birthday, I learned Mother was going to have another baby.  I’m not sure it was actually planned, but obviously neither was it prevented.  I was the middle of three daughters who loved to pretend, play house, and play with dolls.  So when I learned of another baby, I was all on board to help raise this baby girl myself.  Yes, I hoped for another girl even though everyone else seemed to think that a little boy was in order.  Daddy needed a son to carry on the family name, so everyone said.  I, however, had my own agenda and prayed diligently for that sister.

My prayers prevailed (or possibly just the natural course of life); and on that beautiful June day in 1964, Karin Joann arrived.  As I recall, Aunt Maxine named her and selected the non-traditional spelling, Karin.  I couldn’t wait to go to the hospital and see my baby sister when Daddy came home and told everyone that he thought she looked like me.  My other sisters looked more alike with Mama’s blue eyes, and I did think it odd that I was the only daughter with brown eyes.  I even entertained the thought that maybe I was adopted (didn’t matter that Daddy’s eyes were dark brown too).  So hearing this news thrilled me.  I couldn’t wait four or five days to see her when they would be released from the hospital and begged Daddy to take me there.  But there was just one little problem:  I wasn’t old enough to enter the nursery/maternity ward of the new hospital.  Fortunately, Daddy found a way.  He parked the car and walked me around the back side cutting through the luscious lawn.  Mother’s room was located on the ground floor, and her bed was right against the window.  She was expecting us and had my new baby in the room with her.  She raised Karin as high as possible above her head so I could see for myself and determine if she looked like me.  I took Daddy’s word for it.  I never once heard Daddy say he wished the baby had been a boy.

When they came home, I watched and learned from Mama as fast as I could so that I could hold and feed her.  We had a small house that first year of her life.  Sometimes I slept in the nursery.  One starry night as I was lying in bed and gazing out the window, I carefully planned our fire escape.  I would open the window above the bed, throw down as many pillows as I could find onto the ground close together, then grab Karin out of the crib, stand on the bed, lean out the window as far as I could stretch, and gently let her fall from my arms onto the pillows.  I would then jump out over her, gather her up, and walk all the way to the street away from the blazing flames.  Yep, that would work.  Fortunately, I never had to implement that drill – but I was prepared!

I was still carrying her around a year later when we moved to the Midwest with the ever-present threat of a tornado.  Mama had been in California for many years where she met and married Daddy but had not forgotten the terrifying roar of a tornado and hiding under a bed for safety as a child.  With the move, Daddy had found us a larger house with a full basement, and Mama didn’t hesitate to march us down the steps from the comfort of our beds in the middle of the night until the storm passed – even if it might be just a loud thunderstorm (so said Daddy who remained in the bed).  But this one particular night, Mama’s instincts were on point.  The internal entrance into the basement was in the kitchen.  Just as she herded us to that door, the back external door on the other wall blew open and glass shattered onto Mama’s arm when she reached to shut it.  She hurried us on through the basement door.  I was about halfway down the steps with Karin in tow, when I lost my footing and ended up on my knees and elbows along with the back of Karin’s head on the concrete floor.  Oh my gosh.  I dropped my baby sister!  Her quiet nature was evident even in this – she cried just a little.  Mama tended to her, and I don’t remember a hospital trip.  But that was the longest night of my life.  I worried that she might not wake up and was so relieved when I tiptoed into her bedroom the next morning and saw the rise and fall of her rib cage.

We grew up surrounded by a loving extended family, the two older ones and the two younger ones.  The two blue-eyed girls (first and third daughters) looked more like Mama with outgoing personalities, and the baby and I were introverted with more of Daddy’s characteristics.  At the age of seven, Karin was the flower girl at the oldest sister’s wedding, just a few months after her high school graduation.  Even then, Karin’s academic excellence began to shine; but she remained humble and quiet.

We grew up with a typical Midwest upbringing and strong family support, but finances were limited.  There simply were not funds to attend a four-year university.  So as we each one graduated from high school, we made alternative plans.  Fortunately Mama and Daddy modeled a good work ethic and instilled that in all of us.  We were able to find our strengths in the workforce and complete enough extended training and specific course work to make it in the business world.  But that four-year degree eluded us.

In 1982, we all gathered back in our hometown for high school graduation of the youngest daughter; and I wondered if this academically gifted one would be able to find a way.  From the eldest sister to the youngest, the pattern was the same.  We each had our God-given gifts and managed to carve out a good life.  We married young and provided for our families. 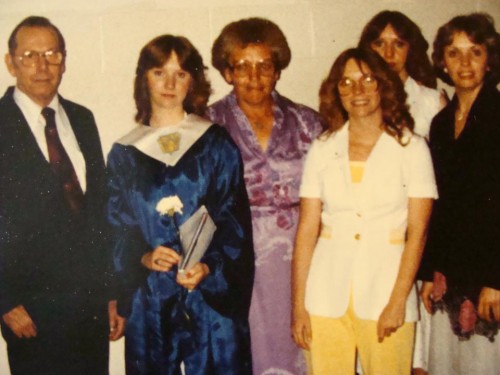 Karin was successful with everything she pursued.  She became an award-winning photographer and entrepreneur starting a couple of photography businesses.  She also worked in the medical field.  She raised two sons and as the youngest was considering his college options, she became restless.  She wanted to pursue that one thing her son was about to do.  But could she swing it?  Sisters and Mother rallied behind her, encouraged her, and she took the brave plunge making a few life changes.

We watched as she worked full time and went to school full time to pursue her dream.  She was determined and persistent and never gave up.  There were long nights, endless weeks, and months turning into years of juggling work, classes, and study time.  And this week, a little piece of each of us walked with her as she accepted that prize.  She is an inspiration.  And I just want to say to my baby sister:  “Your mother and sisters are so proud.  I only wish Daddy could have been there too.” 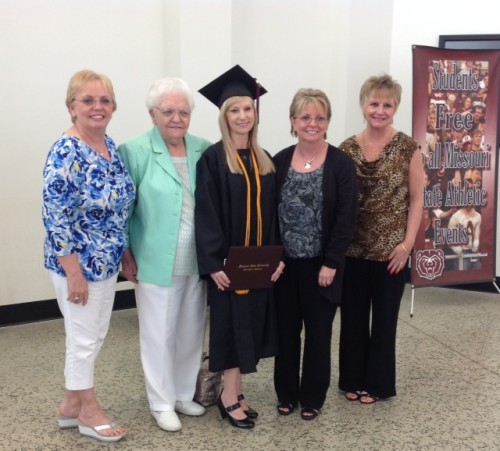