Why do I love this white stuff that others detest, even abhor?  I don’t know.  Let us reason together.

The first decade in my life was lived out in my birthplace town in southern California.  On clear days, I remember peering out the window in our dining room and seeing white-capped mountaintops.  They seemed close yet were so very far away, especially the white stuff on the top Mother said was snow.  I believed her, although the only snow I had ever seen fall was on Christmas television specials.  I remember longing for the white Christmases I would see with Bing Crosby, Dean Martin, Andy Williams, and the like.  Snow in these programs added magic to the holidays and the Santa story.  But Santa always seemed to make it to our house without the snow and without the chimney.  Thank goodness!

I remember going to my older sister’s Christmas program at school and loving the part where she walked around with a boy in a winter village while singing “Winter Wonderland” and thinking how neat that was.

I remember one year, snow was predicted north of us.  Mother planned a day trip to take us and our friends to play in the snow.  But tonsillitis struck; and I wound up staying with my friend’s mother while she, my sisters, and their friends got to go play in the snow. 🙁

The next year, snow had fallen again north of us and Mother tried her best to get me there.  But by the time we arrived, it had melted. 🙁  Was I ever going to get to see and touch real snow?

I also thought it would be wonderful to wear a fur coat so frequently pretended that my house robe was a fur coat when I dressed up and played “house.”    I watched Mother pack to travel back to the Midwest one autumn for her brother’s funeral (way too young to die) and was fascinated with a cardigan with a fur-trimmed edging going in the suitcase.  It looked like mink, but I’m sure it was just a good imitation.  She told me it could already be cold in Missouri.  I wondered if there might even be snow and thought how lucky she was to get to make the trip, although it was a sad time.  The first thing I remember asking her when she returned was, “Did you wear the sweater?”  (Alas, it wasn’t cold enough – didn’t get to wear it.)

Then the year came that Daddy moved us to the Midwest – the summer of 1965 – and I couldn’t wait for the first snowfall.  As I was getting ready for bed on that first Christmas Eve, the weatherman said there could be a flurry or two but nothing to be concerned about; and, certainly, we didn’t need to expect a white Christmas.  So off to bed I went a little disappointed but at least the excitement of Christmas was still in my heart and I was hopeful that the next few months would produce a few snowflakes.  And, of course, Santa was still very real so there were presents to look forward to.

I woke up the next morning, early as usual, and first thought I had slept in.  The room seemed especially bright.  The house was quiet, and I was sure no one else was awake.  Had we all overslept, even Daddy?  I peeked through the curtains and couldn’t believe my eyes.  SNOW!!!  The entire ground was covered.  In fact, I couldn’t see anything but snow.  I couldn’t wait to wake up my sisters.  And so, my friends, I learned the weatherman does “miss it” sometimes – a white Christmas indeed.  I believe about ten inches were officially recorded and, thus, I finally got my day in the snow with a few more days added on for good measure.  Sisters and I built a snowman and had our first snowball fight.  And while I didn’t have a fur coat, I did have a coat with scarf, mittens, leotards, and boots.

After a few years, the novelty wore off and I realized that snow could also dampen our modern running-to-and-fro lifestyle, but I always appreciated the beauty, especially the beauty of undisturbed snow.

My first trip to the Rocky Mountains surprisingly came in the summertime as a baseball mom.  For two straight years, we traveled to Steamboat Springs for a baseball tournament.  One of my sons and I thought it would be really cool to return in the wintertime and learn how to ski.  We kept that secret to ourselves since the remainder of the family didn’t share that sentiment.

A few years later, I visited Lake Tahoe with my sisters and Mother in the fall.  Although there wasn’t enough snow to learn to ski during that week in November, the majestic mountains capped with snow surrounding the lake provided us with some of the most breathtaking views known to man.  And then one winter, I specifically took a winter vacation to Estes Park just to be around the snow.  By that time, I had given up on learning to ski.  It was sufficient to sit around the fire and admire the views.  I still loved snow.

But maybe there’s a deeper reason.  I love my recently-paid-off car.  It’s pearl white, the color I wanted when I purchased the car before it.  I watched someone drive that car off the lot as I returned to make my down payment.  I had to settle for a blue one instead.  So when I shopped for my current car and found it in pearl white, I didn’t hesitate.  My very first car was also white.  I once had someone point out that white is a sign of hope.  And I read that white depicts faith, purity, and perfection.  [Hmm … pondering]

Although I do have an appreciation for the ocean and a tropical vacation, if I could pick only one dream vacation, it would be to hunker down with the fire, cocoa, and my journal with a blanket of snow surrounding outside amidst the mountains.  Yes, I do love snow.  But since I live in Kansas City, I must settle for  four or five blankets a year and appreciate the beauty when it arrives – like the other morning.  While others were cursing the cold and commute to work, I smiled and watched the sun rise up over the winter wonderland on this second day of the brand new year. 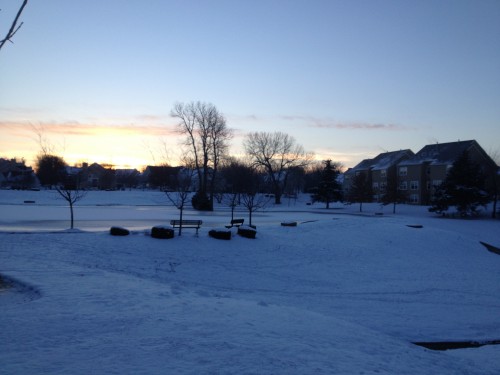 I pulled out of the drive in my white hope, and since I hadn’t tired of Christmas music, listened to Kenny G serenade  … sleigh bells ring are you listenin’ … – you guessed it – “Winter Wonderland.”

And one other tidbit that comes to mind:  “Though [my] sins are like scarlet, they shall be as white as snow …” Isaiah 1:18  (NIV)

Maybe that’s why I love snow.