To the surprise of many, it’s still Blue October. After we secured a post-season spot, I celebrated a “Royal” lunch with one of my sons in Cardinals nation.  We wore it proudly. 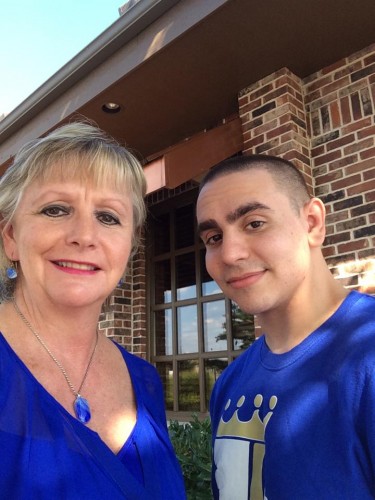 The Royals won the wild card game – and in dramatic fashion – coming from behind, stealing bases, and smashing those timely hits. The hometown crowd erupted when the game-winning hit skipped sharply past the third baseman near the line – “FAIR BALL!!”

That night, life in Kansas City went up a notch. There were celebrations in living rooms (mine included), at watch parties in social establishments, and in workplaces that could not shut down. As the Royals’ manager well stated, “The players didn’t quit, and the fans didn’t quit.”

The team hit the road to play the first two games of the Division Series in California. Personally, I thought if we could just win one game, it would keep us in contention.  In my wildest dreams, I didn’t imagine the team returning to Kansas City with a two-game lead and itching to sweep. I gathered my gear for that first home game. 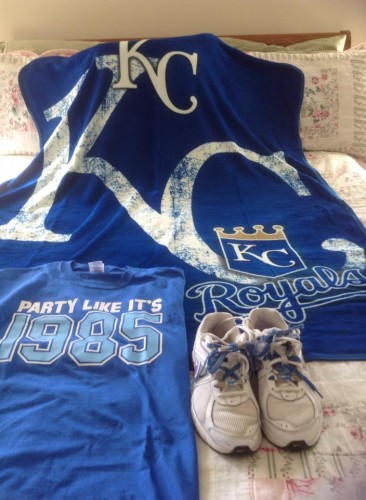 My sons and I tailgated with a few friends.  The parking lots were crowded, people were friendly, and we all were there to witness a common goal unfold. 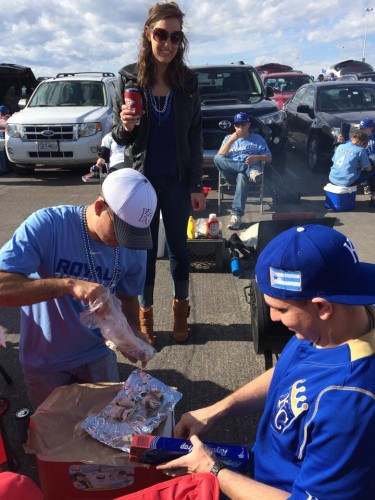 It was a spectacular Sunday afternoon, a blue October sky.  The aroma of every kind of barbecue item you can imagine was in the air.  Hatchbacks were wide open, music strummed along, fans shared food and drink, and we watched the Chiefs on television from the tailgate next door. Time quickly passed. My son brought a broom, along with many other hungry fans. 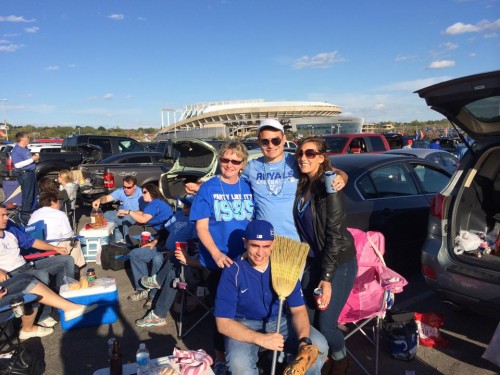 We scattered to our seats  armed with rally rags and allowed plenty of time to get situated for the opening ceremonial rituals associated with an important game such as this. 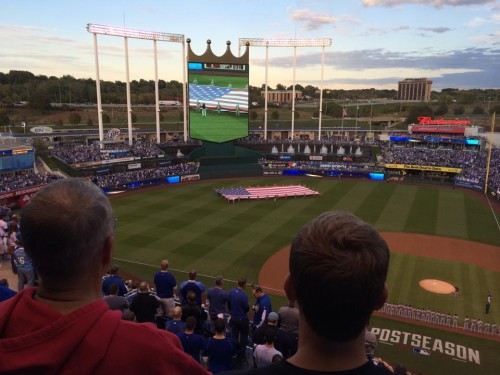 I agree with a friend who said, this sight gives me chills each and every time. 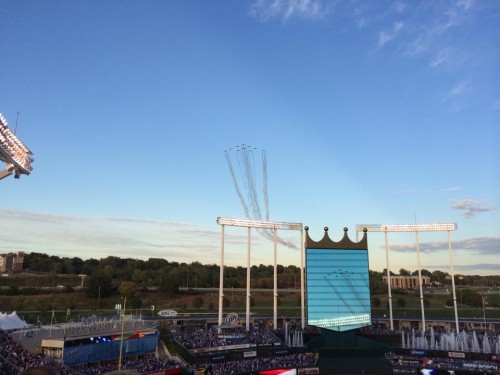 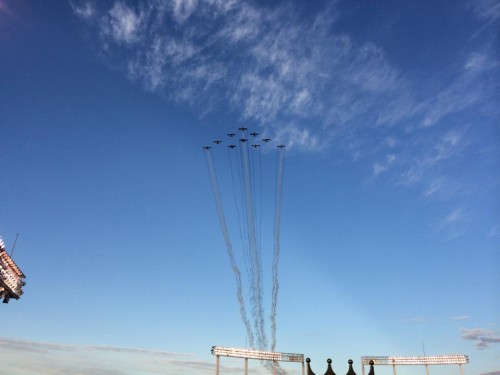 The visiting Angels silenced the home crowd with a first-inning home run, but the home team Royals took control and did not relinquish the lead once attained. Again, the boys in blue would not quit. Hit after hit, play after play, they did not disappoint their fans. The visiting team went home, and the Royals and their fans “PARTIED LIKE IT WAS 1985!” They (we) were division champions, and I got to witness it. “Let’s Go Royals” echoed through the spiral ramp down just like in 1985.  Fans hugged strangers. It was a night to remember, and it would not be the last.

As we moved to the American League Championship Series, tickets were hard to find. But my excitement did not diminish as I watched from afar – rally rag, rally beads, and hope prevailed. The first two games were in Baltimore, and I left for a sisters’ weekend getaway and watch party. All of us were ready to cheer on our Royals! 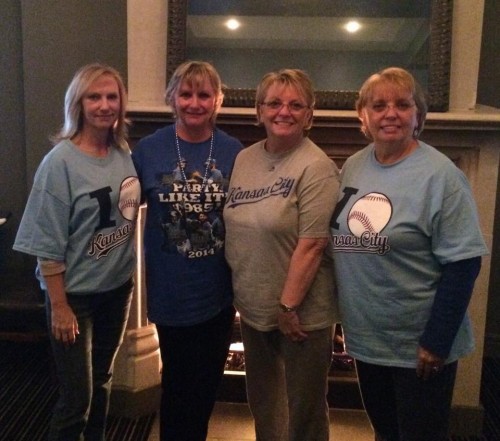 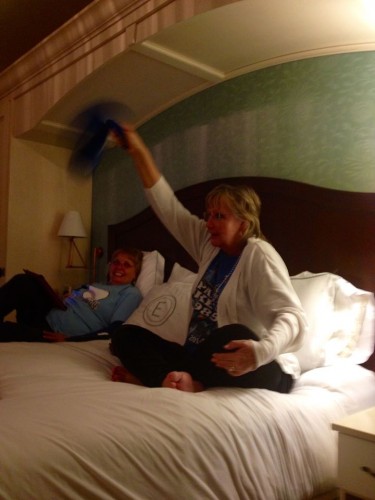 The truth is, we might have been a little rowdy; but we weren’t alone. Strangers from two wedding parties left their groups to join us in the library bar when we were asked to leave the more-formal dining room. (Hey, we tried to go there to begin with, but the doors were closed. We were simply looking for a TV and a little food. Management decided to open it.)  🙂 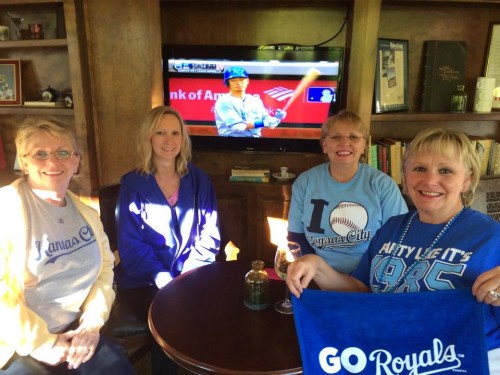 Who would’ve dreamed this as the season began early last spring? Many extra innings and sleep deprived, we won the wild card game, swept the division series, swept the league series – it really did happen. I watched the final game in my living room. Pinch me!

Now, we wait a little longer. I’m catching up on laundry because my closet is depleted of anything blue. World Series tickets are impossible to obtain, especially at face value. At this point, it’s a rich man’s game. It’s not so bad. I can experience the thrill from afar. This is so good for our city, and I couldn’t be more proud of our team.

I can remember 1985 as memories are made in 2014. For almost thirty years, I tried to convey the excitement, the camaraderie, the full stadium – the good old days – to my sons. Now they know; they have experienced it. It’s happening in their lifetime. Boys, it really is real.

One final note, lest someone be swift to judge and think that I’m concerned and way too excited over such a temporal thing: just know that I rejoice every day that my name’s written down in the Lamb’s Book of Life. I am thankful for life, breath, health, and a job. I pray that the entire world can live in peace.

But for right now, please, just let me enjoy this ride a little longer. 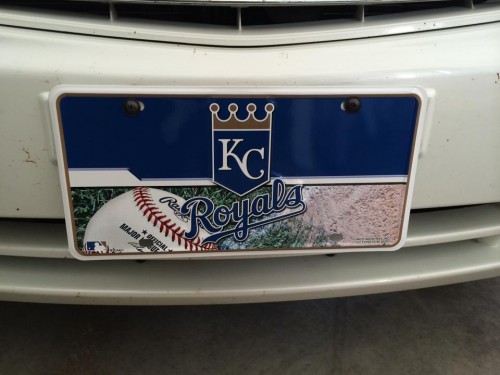