It was 4:15 p.m. and had been a slow day that I was anxious to see end.  I shifted things on my desk and stacked folders to be audited in the morning on the left corner when the telephone rang.  It was Captain Reynolds.

“Specialist, you need to report to Main Post Headquarters in the morning at 7:30.”

One thing you learn in the military is to never question your commanding officer.  “Yes sir.  I’ll be there.”

It wasn’t the first time I had been called to an out-of-the-ordinary meeting.  The last time, I was asked if I would pose for a joint military recruitment poster.  I agreed but never heard from them again so wondered what this meeting could be about.

The next morning, I arrived fifteen minutes early in combat fatigues – strange attire for a finance job in a regular office setting but was quite appropriate for the First Infantry Division.  It was a crisp October morning, and I was glad I had remembered to wear my field jacket.  I stopped to remove an orange maple leaf stuck in the lace of my boot as I opened the door into Headquarters and headed up the stairs.  I moved through the open door of office 234 and saw a fortyish-looking man with a thick black moustache and silver colonel insignia on his collar flipping through a folder.  He looked up, “Specialist, Colonel Smith here.  Please have a seat.  I need to ask you a few questions.”

He was matter of fact, yet polite.  “Why did you join the Army?”

I was certain he didn’t want to be launched into all of the details.

I came from a very simple life in a small town where finances were limited and less than a quarter of the girls attended college.  The majority got married or found jobs.  I was a good student, however, and intended to attend a four-year university after graduation.  My well-meaning intention lacked appropriate knowledge and planning.  I hadn’t a clue on the process required to apply, be accepted, and actually attend a formal university.  Somehow I fell through the cracks when it came to receiving guidance for this process during my high school years, which angered a very supportive business teacher when she learned of my alternative plan.

I killed an engagement with my high school sweetheart as I entered my senior year and yearned for something different – a taste of the real world.  I didn’t want to be trapped in the cocoon of small-town philosophy.  So I shocked my family and friends and joined the military.  It was a far cry from dresses, matching shoes, baton twirling, ice skates, and a lifelong dream of dancing.  Joining the military in the mid-seventies appealed to me because I could use the GI Bill to fund my education just a couple of years later.  I scored high on the entrance exam and was allowed to attend advanced training in any field desired except auto mechanics.  After basic training and extended training in finance, I was assigned to a regular position where I worked and interacted with civilians even though I was in the Army.  I enjoyed military life and my work and enrolled in night courses.  I coasted according to plan until I met my future husband.

I spared the colonel and modestly answered, “To travel and receive educational benefits.”

“Well, at this pace, it’s going to take you a decade to finish your degree.  We have another way in mind.”

I felt like he had a video play-by-play of my life as he prodded with various questions.  What was the meaning of this?  About a half hour into the session, I realized I was being interviewed to be in the first graduating class at West Point to include female cadets.  At the end of the session, he said I was accepted.

He concluded, “You are the only person on this post being interviewed, and we are taking only four or five in total.  We feel it is best to do a trial run with women who are already exposed to military life.  Much planning and orientation is required prior to the next session.  I am sorry, but you have only two weeks to confirm the appointment.”

This should have been a no brainer.  But at nineteen, the eight-year commitment seemed an eternity.  To add to my confusion, my boyfriend returned and had no desire to be held captive by military life.  At the beginning of the summer, I left for a two-week leave to attend my best friend’s wedding in the neighboring state, Missouri.  He left at the same time for New York to visit his family.  I returned as scheduled after the wedding and waited for his call … and waited and waited.  Long before the day of cell phones, there was no way to reach out to him.  I only knew his name, had never met his parents, and my attempts at finding a phone number for them failed.  I was emotionally exhausted and filled my spare time with designing and sewing a wedding gown for a ceremony we had planned in the coming winter – a gown that was never worn.  I crafted several scenarios in my mind of what might have happened to him but ultimately accepted that I had been dumped.  It had been a long depressing summer.

I resolved not to accept the appointment.  Quite frankly, I didn’t realize the opportunity that I let slip away until years later.  This was a once-in-a-lifetime chance that would not come again.  I was in love and chose my heart over my head.

I set my course with this decision and lived the traditional family life.  It was not a bad choice. We married two months later at the local courthouse, and I left the military the following year.  My shoes changed from combat boots to high heels in the corporate world.  Ten years passed, and we were blessed with a healthy baby boy.  Within five years, another two sons completed our family.  I donned sneakers, left my corporate career, and celebrated life with bottles, diapers, Disney movies, and a treasured minivan.

But five years later, I sobbed and was rattled with fear when I realized I would have to return to the business world.  Holy cow, corporate life had changed from Selectric typewriters and mainframe systems to a personal computer on every desk!  I had to start all over from scratch – at the bottom.  It occurred to me that by the time our first son was born, I would have been well beyond the eight-year West Point commitment and I had already had a successful business career.  I dried my tears as I exchanged sneakers for high heels once again.  A year later, I was in full swing switching between high heels in the daytime and baseball cleats at night and on the weekends as I juggled the roles of wife, career, mom, and baseball manager.  It was a life overflowed with much joy.

Then one day I faced the empty nest and a divorce all at one time.  I pondered life’s decisions: past, present, and future and reflected on not achieving my potential in that very first career.  I lived for the moment rather than the future, and maybe that is/was the better road.  I appreciated the blessings of a family life but perhaps could have had both.

Last Memorial Day I embarked on a day’s journey to attend a family reunion in my small home town.  This memory of a lost opportunity smacked me in the face as I circled the on-ramp to the interstate.  Right there, in the wide-open plain twice the size of a football field, a sea of American flags was planted into the ground – more flags than one could count – rows and rows of old glory blowing out in full honor standing at attention.  Patriotism and pride rose from within my soul as I remembered.  And it struck me; I might have worked in the Pentagon and White House or retired a general by now.  I should have tried for it all. 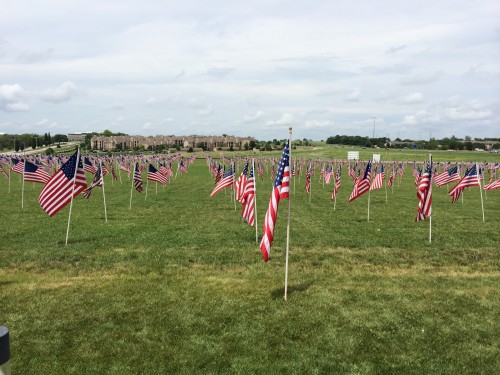 Oh to have the wisdom of “fifty something” when we are but only nineteen.