Regrets, I have a few … oh yes – did I ever mention how much I love music and lyrics?  Sometimes I hear a song and all these thoughts fill my head, so I have to write them down … well, that’s another story.  As for one of my regrets … yesterday being Veterans’ Day reminded me about it …  oh to have the wisdom of “50 something” when we are but only 19.

I did something a little unorthodox for a female in the mid-70s after my high school graduation – joined the military.  I came from a very simple life in a small town where finances were limited and probably less than half of the girls attended college.  I was a good student, however, and should have found a way to attend right then.  Joining the military appealed to me.  If I joined the military, I could use the GI Bill to receive my education – just a couple years later.  I scored really high on the military entrance exam and was allowed to be trained and to go into any field I desired except that of an auto mechanic. 🙂  I chose finance and accounting.  After basic training and my extended training in finance, I was assigned to a regular job where I worked and interacted with civil service employees even though I was in the military.  I enjoyed military life and my work and began even then to further my education by enrolling in night courses.  During my second year, I was ordered to attend a meeting one seemingly ordinary fall morning.  I entered the room and discovered that I was the only invitee to meet with a major from West Point Military Academy.  He had my personnel folder in front of him and began asking me various questions.  About a half hour into the session, I realized I was being interviewed to be a cadet in the first graduating class at West Point to include females.  At the end of the session, I was told that I was accepted and had two weeks to decide.  In retrospect, I did not have the maturity to make this important decision.  It should have been a “no brainer.”  But at 19, the eight-year commitment seemed overwhelming.  I elected not to accept the appointment.  Quite frankly, I didn’t realize the opportunity that I was letting slip away until years later.  This was one of those opportunities that would not come again – yes, a regret.

Pondering life-changing decisions like this is why I selected a proverb as my epigraph in Reflections.  I had set my course with this decision.  It was not a bad course.  Ten years later, I was blessed with a healthy baby boy; within five years, was blessed with another two; and had already experienced success in the corporate business world.  But perhaps I could have had both.  After all, it was ten years later, and the commitment was for only eight years.  Who knows, I might have retired a general by now, worked in the Pentagon or White House – you see, we don’t know.  But this one thing I do know, I set my course; and a higher power was still at work throughout my lifetime as I took each step.

I am proud to say I am a veteran of the United States Army. 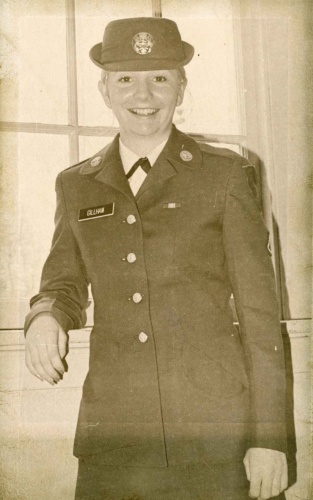 And as I ponder the regret of not fulfilling my potential in this area, I still have an appreciation for life’s blessings.  So today, 30+ years later, I can set my course again and watch my steps unfold as I acknowledge this higher power.  It’s a new day.

“In his heart a man plans his course, but the Lord determines his steps.”  Proverbs 16:9  (NIV)