The names are Gordon, Butler, Shields, Holland, Perez, Hosmer, Aoki, Escobar, Infante, Dyson, and Duffy – to name a few.  They didn’t believe the bad report – that they were destined to lose.  They played like they knew they could win. Sure there were ups and downs, but they never acted like losers.

“The Way We Were”

I went to my first Royals baseball game of the season last week and, oh, the memories that were stirred.  I’ve loved the game my entire life.  When I moved to the Midwest with my family from California at the age of ten, I remember being a die-hard Dodgers fan along with my dad.  It took a year or two to be converted to a Cardinals fan; but then, much to the dismay of my cousin Benton who moved the same time we did, I finally converted … the days of Bob Gibson, Steve Carlton, Orlando Cepeda, Lou Brock, Tim McCarver, and Joe Torre.  I knew the lineup, and I knew them all.  One of my dreams was to someday attend a professional game.  I wanted to play baseball instead of softball, but that just wasn’t allowed.

I settled northwest of my southern Missouri home as an adult – in Kansas City – and finally converted to a Royals fan.  What a fabulous team they had in “the day” … George Brett, Frank White, Willie Wilson, Hal McRae, Dennis Leonard, Bret Saberhagen, Paul Splittorff, Amos Otis, Dan Quisenberry, Charlie Leibrandt, John Mayberry, and Fred Patek … to name a few (or a lot).  In those days, you had to purchase tickets far in advance just to get nosebleed seats, unless you were fortunate enough be a season-ticket holder.  Being the early days of my career, that seemed an impossible feat, but I thought – maybe someday when I am more established.  I attended my first professional game with my dad and sister at Kauffman Stadium, then known as Royals Stadium, in my early twenties. I remember being invited by a friend a couple of times to sit with her in her mom’s company’s season-ticket seats – just a few rows back above the third-base dugout.  What a treat!  I watched the kissing bandit make her way down the aisle past us and onto the field to “lay one on” George Brett one of those special Sunday afternoons (eventually that came to a halt); and I remember Mr. & Mrs. Kauffman leaning out from their suite window waving to the crowd between innings, Mrs. K waving her white hanky slowly, back and forth – just like the royal lady she was.

Oh, yes, the white hanky …  well, this is the way I remember the invention of the “rally rag.”  Perhaps someone came up with it before then, but this is my recollection of the first time in Kansas City.  I was listening to the game on the radio one evening.  The Royals were down a few runs late in the game.  We were closing the gap and maybe there were even two outs.  I remember the announcer saying Frank White had picked up a towel in the dugout and was waving it around to get everyone pumped up.  Well, it worked, and it spread like wild fire.  Fans and players alike started waving anything white they could find.  The Royals did come back and win that game and, thus, marked the debut of the rally rag.  Yes, those were the days.  It was acceptable in those days to even skip the last part of the church service on Sunday morning if you were lucky enough to have “those” seats for an afternoon game.

How fitting it was that the year my first son was born, the Royals finally won the World Series.  He was four-months old when I spread a blanket out on the living room floor, dressed him in his #5 “George Brett” suit, and we watched the final game.  I had entered my name in the selection process that year to buy American League playoff tickets and was present at game three on a Friday night when George hit two home runs.

I tried desperately to describe those days to my sons several years later when the Royals struggled just to stay out of the cellar.  The boys simply couldn’t imagine.  They were busy playing the game themselves – and so was I – managing two of their teams and traveling across the country with another one playing on a hotshot team.  You couldn’t live in our house and not play baseball. 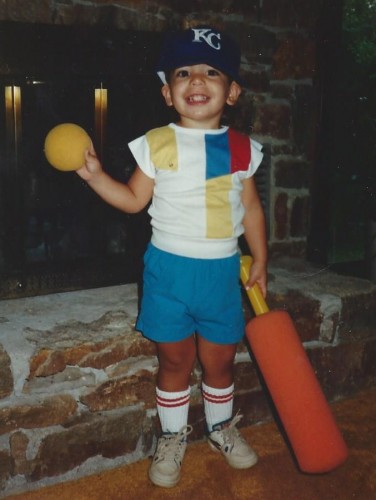 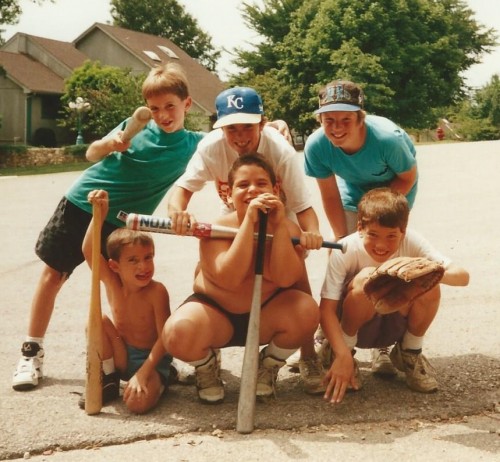 We played baseball spring, summer, and fall with a brief break in the dead of winter.  We had a batting cage in the backyard and practiced in a cave in the winter.  Our bags were full of bats and gloves of all colors, shapes, sizes, and impressive names – the latest and greatest.  And, of course, it was acceptable to wear your baseball uniform to church if you had an early afternoon game on Sunday. 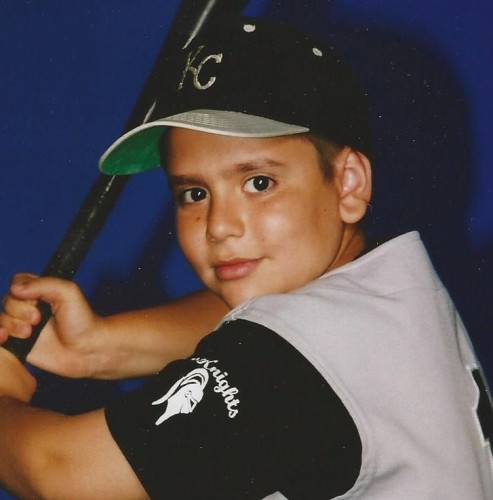 One time a co-worker told me, “I know you have great faith and God is number one in your life, but baseball is running a close second,” (as he positioned his left hand about an inch under his right).

Another co-worker a few years my senior, who was well past the baseball days of her sons, told me: “There is life after baseball, and it will be okay.”  I couldn’t imagine that when I was in the midst of it all. 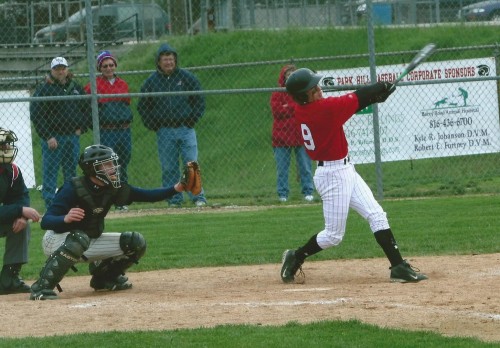 When I was sitting back last week taking in the sights of the renovated Kauffman Stadium, I couldn’t help but reflect on those good old baseball days.  I wonder if the Kauffmans would approve of all these changes.  Would they like the seats that took over part of the outfield fountains?  (I think Mrs. K would be glad to see they didn’t remove the fountains completely.)  I think they would like that we still boast the crest – a crown scoreboard bigger and better.  Those lights engulfing the circumference of the field flashing any stat or information you might want to know is quite impressive.  I think they would love the natural grass infield and outfield.  The blue seats are more appropriate for our team name, and I think they would be pleased to know that the original orange seats are now used at a local high school.  Maybe they would have dinner from time to time in the Crown Club and maybe even take a seat in the front row behind home plate on occasion.  They would likely be bombarded in the Diamond Club so doubt you would see them there.  Would they mind that “Thank God I’m a Country Boy” was replaced with “Friends in Low Places?”  (Not sure about that one.)

Being the entrepreneur that he was, Mr. K would probably understand that there is a time and season for change, and I know they would be proud to host this year’s All Star game. 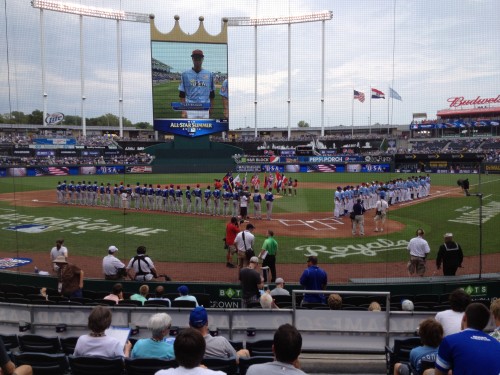 I remember one of my favorite quotes from Mr. K went something like this: if you want to become a millionaire, just be a billionaire and buy the Royals. He lost money for the greater cause, the benefit of the residents of the greater Kansas City area – the continued presence of a major league baseball team.  I, for one, am thankful for all of the Kauffman contributions to the Kansas City community that continue to this day and hope that the stadium will forever be called “Kauffman Stadium” because that’s what it truly is.

My sons are grown now, and my life today is different – a demanding corporate career, writing, attending the ballet in the new magnificent Kauffman Center for the Performing Arts, an evening of ballroom dancing once or twice a week, an occasional dinner out with family and friends, a concert or ballgame a few times per year, and I love that girl time with sisters and close friends.

Then I see that mother struggling to juggle everything.  She loads her gang in the SUV, drops one off at a practice as she drives another to a game.  If she’s lucky, she might actually get to see the entire game if she can arrange a ride for the one at practice.  And then she chooses her days carefully when asking to leave work early in time to see at least a few innings of her high school son’s game that starts at 4:00 p.m.  And hopefully she arrives in time to see the game of his life hitting a ball 400 feet against the wind to propel his team to victory or watch him strike out the side to shut the other team down (or perhaps she is lucky enough to have someone capture the moment she missed frame by frame on camera).  I have empathy for her but can say without reservation:

There is life after baseball, and it will be okay!

… love the game and life continues on …

Now for a few other present-day names:  Moustakas, Davis, Herrera, Cain, Ibanez, Vargas, Duffy.  And let me just say, it warmed my heart to see Guthrie interpret for Ventura during an interview after a clutch win last week, teammate for teammate.

Yesterday I traveled out of town for a weekend of activities surrounding a high school reunion in southern Missouri.  I really did plan to “live in the moment” and leave my phone tucked away in my purse.  But a friend honed in on the game on television in KC started texting me little nubs about the game, so I couldn’t resist and checked scores for myself – alternating between the Royals playing the White Sox in Chicago and the Tigers playing the Twins.  Holy moly, our magic number was down to one.  This could be the night.  After the football game, we gathered at a local classmate’s house for more socializing.  One television was already turned on  – a baseball game.  I mentioned to the host that I was checking the score of the KC game, so he tried to find it, to no avail.  Oh yeah, we are in Cardinals nation this far south. How could I forget?

By now, anyone and everyone knows that those boys in blue did it.  We have secured, at the very least, a wild card spot.  It would have been nice to see that celebration live, like George Brett.  (Was he excited or what??!!)  I watched the replays this morning.

Wild card – nope, that wasn’t around in 1985.  Heck, Sluggerrr wasn’t even born until 1996! Wild card, division champs – it’s all post season.  There’s a chance my sons will get to use their upper deck, game one, tickets.  🙂

This year, for the first time in many, many years there was a new song in the house.  Don’t Stop Believin’ replaced Friends in Low Places.  The fans picked it.  That makes me go hummmmm.  The new thing I see this morning: We’re Gonna Party Like It’s 1985 – I like that too.

For the first time in 29 years, life for the Royals and their fans (this one included) continues on … 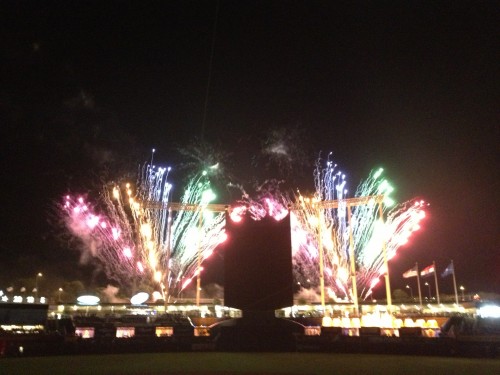