A friend invited me to escape the cold winter and visit her in sunny southwest Florida for my birthday. I found reasonable airfare, planned out the days, and booked it. Then I decided it would be nice to visit my son on the way down so added a few flights and days to the front end of the trip.

I left early on a Saturday morning, checked two bags and carried on two, changed planes in Nashville, and arrived in Pensacola without a hitch or a glitch. (Well, I did need a little help lifting and squishing my full-size carryon in the overhead bin.) I hadn’t traveled by air in over a year, so it was a nice jet-setter feeling again.

My son greeted me at the bottom of the escalator with a bear hug while his girlfriend waited in the car – first time meeting her. After another warm hug, they loaded the bags in the trunk – all four. What a beautiful arrival day – the clear, crisp air and sparkling sun created a to-die-for lunch on the deck of a beachfront restaurant. 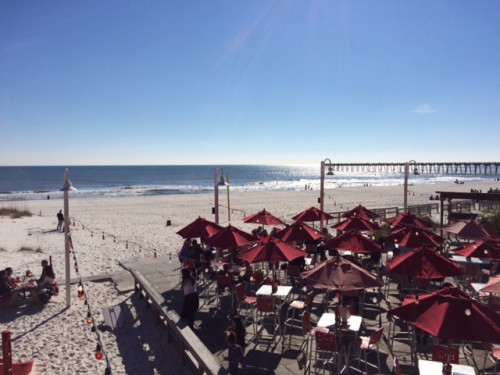 The next morning, we loaded up the car with twin three-year old boys they were babysitting and headed out for a twenty-minute drive to church. I looked forward to attending with them, but sometimes our best-made plans just don’t work out. As he unbuckled the twins out of their car seats, I opened the trunk to gather items. To my surprise the trunk came crashing down on my head. The blow stunned me for a second – the shock that something had hit my head really hard. Surprisingly, I didn’t feel pain but in a few seconds found myself grabbing for tissues in my purse to stop the flood of blood streaming down my face and onto my green satin blouse. By the time my son returned to the car after depositing the twins safely in their classroom, my hair had turned strawberry blonde. He handed me paper towels and a bottle of disinfectant from a first aid kit and escorted me to the restroom to cleanup.

Needless to say, the service was about over by the time the bleeding halted and I rinsed the blood from my hair and clothes. So I joined my son in the lobby coffee bar where he was waiting for me. Worried, he kept asking if I was dizzy or seeing double. I was fine. Having raised three boys, I was all too familiar with the amount of bleeding that a head gash can produce. I just never expected it to be my head! (You might have thought this portion of the diary would have been about one of the three-year-old lads, not a 50-something lady.)

The next three days were as pleasant as I could have imagined. We enjoyed simple things – a few meals together, watched Frozen, and stocked up at Walmart. I am so glad we took some time late one afternoon to visit the National Naval Aviation Museum. 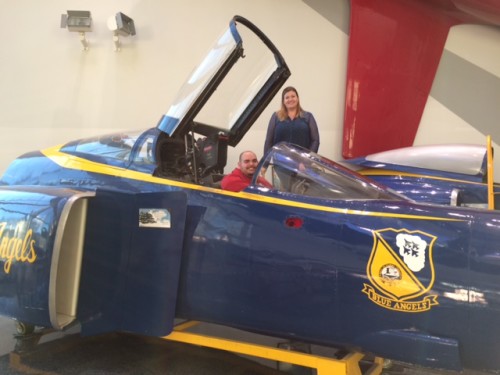 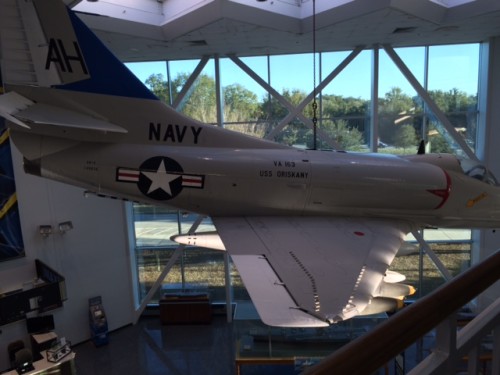 I loved seeing slices of history in more ways than one. 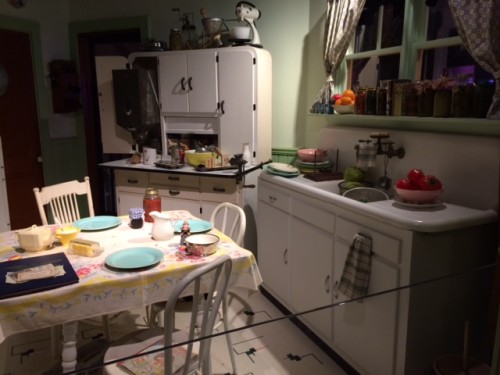 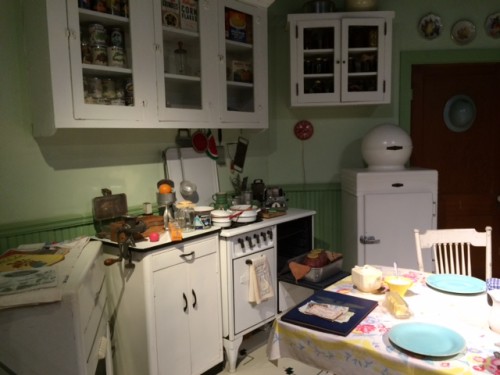 We crossed the street to view the Pensacola Lighthouse, and paused as Taps played at dusk (brought back memories from a few decades ago). 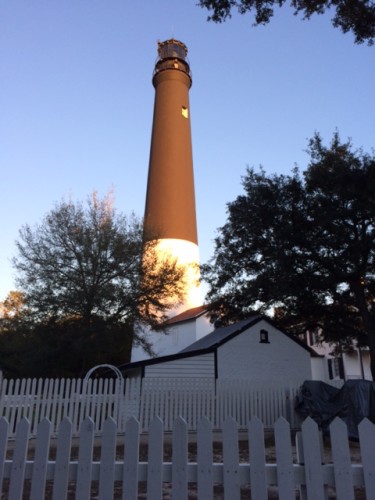 Just like the day I arrived, the sun glistened in the sky the afternoon that I left. Indeed, such a pleasant visit it was; but it was time to leave.

Five hours later, my friend met me at the airport and had a snack waiting when I arrived and settled into my special room. Although others may visit it from time to time, I feel very much at home when I am there and settled in like a returning college student, “my room.”

The thing I enjoy the most when I visit is simple relaxation. There’s no rush to be anywhere at any specific time. We eat when we want, get dressed when we want, and go out when we want – or not. I love it!

The sun greeted me on my birthday morn. 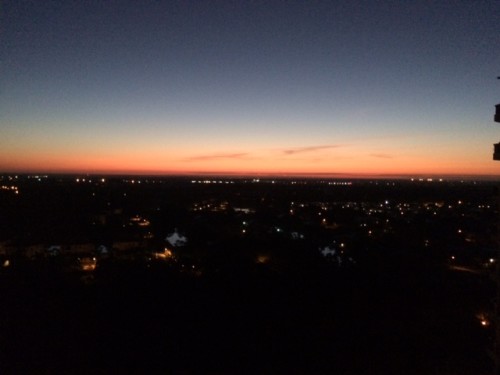 And I kissed it goodbye when we left for dinner. 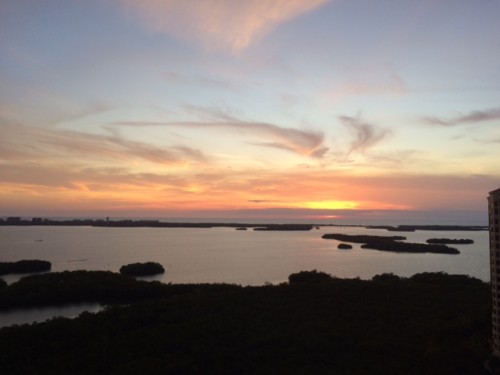 We celebrated my birthday like royalty, in princess style. 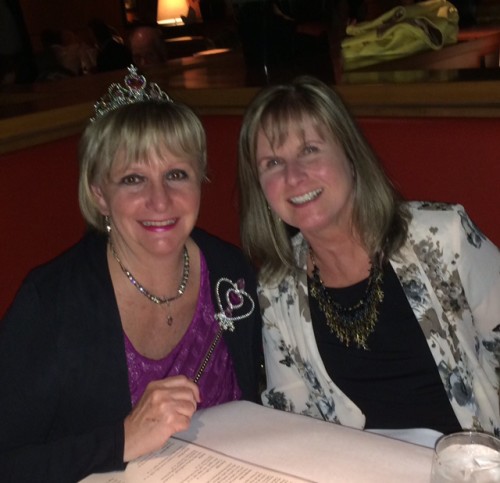 The next couple of days, we shopped a little, enjoyed lunch on the veranda, and watched the sun dance on the water one last time. 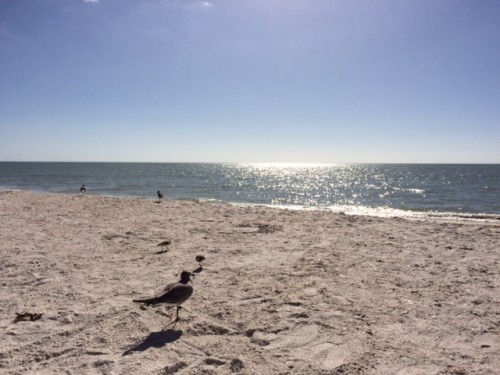 We watched the Super Bowl and Malificient at the same time (minimal dozing for me while multitasking) and one last sunset.

The next morning as we waited to board our flight home, we overlooked the tarmac and saw security vehicles and personnel scurrying around. Passengers chattered about who the VIP might be. We were on a flight to Kansas City with a stopover in Washington DC. I recognized third in line to the throne on the front row.

I don’t believe there was an empty seat on the flight. As we began the descent into DCA, the plane rocked from wing to wing. I looked around to see if anyone else appeared worried, especially when the ground seemed close enough to jump to. I glanced over to blue eyes on my left and then to brown eyes on my right. Both were filled with concern. I wondered which wing was going to hit the ground first. I realized many others wondered the same thing when all wheels finally gripped the runway and the entire cabin erupted with applause. I later learned there was a severe wind advisory in Washington that day.

It was smooth sailing on the next leg to Kansas City. I thanked my friend for the ride home and a wonderful birthday, again. This may not have been the adventure of a couple years ago driving to Alaska. It was an adventure of another kind. Each morning when I brush my hair to the side to cover the scar, I will remember the special time with my son, his girlfriend, and a dear friend. I wrote another chapter in my book of life and was just thinking …

I think I had the choice to sit it out or dance – and I DANCED!

And life continues on …