With attention focused on my book release in 2019, I came across a blog from six years ago that made me smile and prompted new thoughts.

I didn’t want to seem ungrateful, but all I really wanted was the white turtleneck with the arrowhead on the collar.  As I recall, I wore the sweater a couple of times and then was so disappointed when the Chiefs let Rich Gannon slip away to the dreaded Oakland Raiders that I announced at work I would not wear the sweater again until they acquired an adequate quarterback that could lead us to the Super Bowl (which, by the way, Rich did the next season with the Raiders).  So while the Chiefs’ management team stood by their man, I stood on my word too.  I did allow one of the guys in our office to wear the sweater for a United Way fundraiser office parade since he dressed up as the cheerleader and I dressed up as the player.  It was a fun day, and Kansas City fans loved their Chiefs.

Well, this is definitely another day. A new man (boy to me) is in town, and some t-shirts identify him as “Mahomie.” He’s brought such excitement to our city and, surrounded by some other key players, a new hope. Maybe, just maybe, the Chiefs will win a playoff game this year. Maybe that curse is finally gone. In fact, I went out on a limb a few weeks ago and prophesied that the Chiefs are going to the Super Bowl!

So, yes, I’ve donned the twenty-year-old sweater once again, and I’m definitely not stopping to tan on my way home to watch the Chiefs on Thursday Night Football tonight.

And one more thing, if my adult sons are reading this, I’ll take that white turtleneck with the arrowhead on the collar for Christmas this year. 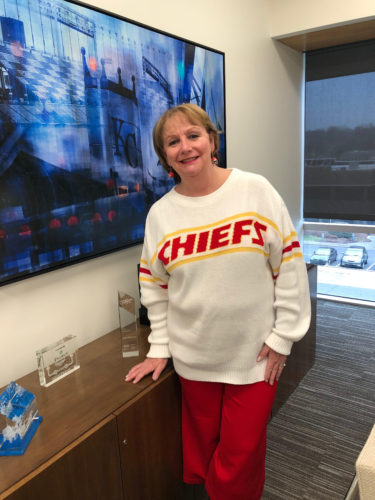