It wasn’t an IPad, Galaxy, Nexus, or ZenPad.

In between household chores and taking care of four daughters, occasionally she took a break. She walked into the narrow galley kitchen, poured a cup of coffee, grabbed the tablet out of a drawer, and carried everything into the small dining room. She pulled out a chair and with pen in hand began her epistle. She dated them at the top – various months and years in the early 1960s. And then it was Dear Lizzie, Delta, Eunice, Wanda, Mildred, or Lorraine – some of her sisters and sisters-in-law in the faraway land of Missouri. Oh, I had been there to visit when I was a baby. There were pictures of us – Mother, Sister Vickie, and me – at Uncle Marve and Aunt Wanda’s Civil War-era farmhouse, but I simply could not remember meeting these relatives. 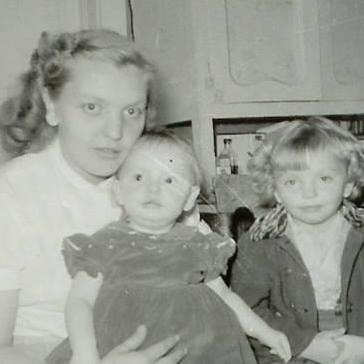 She wrote for fifteen or twenty minutes about what we were doing, how we were feeling, how other family members were nearby in case they had not had time to write – Elnora, Geneva, Clara, and Louise – five or six pages on the 6″ x 9″ ruled paper. Sometimes she finalized the letter, and sometimes she finished in the next day or two then placed the folded pages in a small envelope with a four-cent stamp and entrusted these precious words to the mailman to ensure they were delivered 1,700 miles away. In a few weeks, she received an envelope in return. Many times she – my mother – read the replies to me which were written on the same type of tablet paper by her sisters.

Mother says my writing reminds her of Aunt Lizzie, and that makes me smile. She says Aunt Lizzie had a beautiful penmanship and was very detailed in her writing. She painted pictures with words of her rural life – like what flowers and shrubs were in bloom in her yard at the time (pink peonies, red roses, yellow tulips and daffodils, or lilac bushes) – or maybe she described the abundance from her garden that year and how big Uncle Hike’s watermelons were. In other seasons, it might have been how deep the snow was. And, like Mother, she reported in on the entire family. 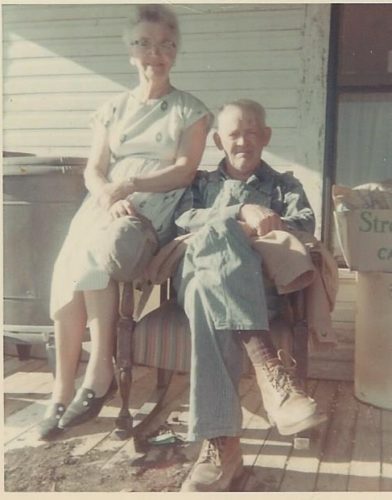 The first time that I can remember meeting her was when she came to California to visit her daughter who owned a restaurant in town. I was at the restaurant waiting for my mother’s shift to end sitting at the snack bar. She walked in with several others, sat at a large round table, and called me over.

She gently squeezed me at the waist and said, “Honey, do you know who I am?”

I shook my head no.

I was awestruck. This lady was no longer words on a tablet but a real live person!

The tablet was useful for other things too – grocery lists, reminders, figuring a budget, and writing down recipes – like Aunt Clara’s cobbler, which was famously renamed Clara’s Clabbler because of the spelling error when Clara wrote it down for Mother on the tablet. More than thirty years later, when I wanted the family apple butter recipe – you guessed it – I wrote it down on a tablet. So I had a tablet, too, and needed the ruled pad to write straight. Even with the lines, I still managed to write crooked! 🙂 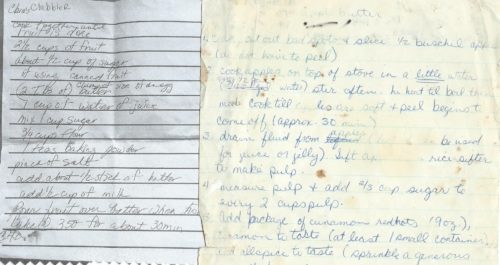 Mother had to re-write Clara’s Clabbler when the original deteriorated with age and use. I opted to type the faded apple butter recipe smudged with various ingredients a few years ago but have placed both of these handwritten recipes in a protective sleeve for future generations to appreciate. (I sure hope they do.)

We weren’t the only ones who used a tablet. This past year, I came across a little treasure written in 1992 by my lifelong friend who died way too young at the age of 48, twelve years after penning the letter. I was so excited to find it – her very own words in her very own handwriting. It’s like she was right there with me after all these years. I will keep it forever. 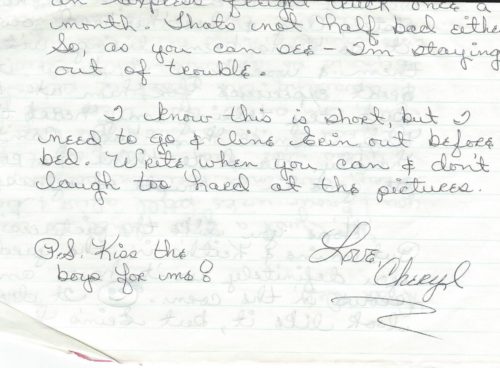 The art of handwriting a personal note seems to be a thing of the past. So it pleases me when I receive one. The notes tell many stories beyond the words on the paper if you just have a bit of imagination. Last summer, I lost another close friend, Cathy, unexpectedly. When visiting her condo the week after she passed, I came across this note from my sweet, new daughter-in-law and thought Cathy must have been drinking her morning coffee when she read it. I then realized the art of a personal, handwritten note is not totally lost. My faith was restored. 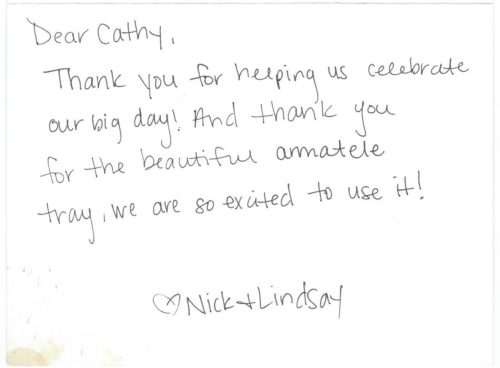 What another treasure I had found. But how guilty I felt. Last Christmas, I had every intention of writing a note in a card to all of the generous people who came to the book signings for Helen’s Heritage. I just couldn’t find the time. I had every excuse under the sun – too busy, too stressed, overworked, no one really cares. Truth was, I just didn’t make the time. And so, this one who calls herself a writer will do better. I promise.

I haven’t seen the tablet for a few years. I looked for one at the grocery store today. It took some digging, but I actually found one for $1.59 – so little money but, oh, so much potential for brightening someone’s day.

Maybe, just maybe, someone will find a treasure from me someday. 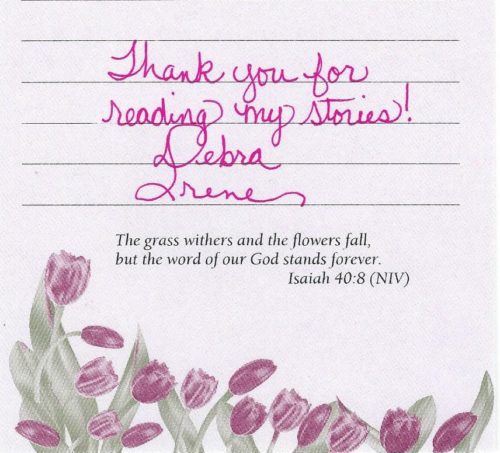